How Does LED Backlighting Affect LCD HDTV Image Quality (and Your Wallet)? 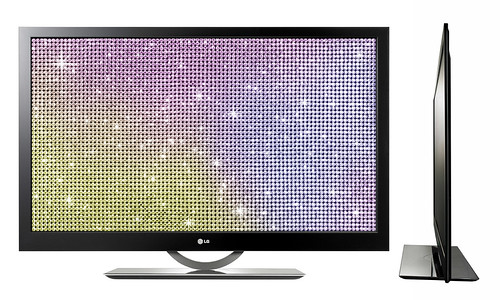 Let's start by tackling a persistent misunderstanding. In spite of what you may have heard or read, there are no "LED HDTVs." An LED is a tiny, inorganic, solid state light source, commonly used for those little glowing dots on electronic devices that show that the power is on. An "LED TV" would have pixels made up of LEDs. Displays like this do exist, as billboards and sports stadium displays; none are small enough for a typical living room.

What some people call an "LED HDTV" is actually an LCD HDTV that uses LEDs for the backlight. If you're familiar with LCD technology, you know that the liquid crystal material doesn't emit any light on its own; all it can do is transmit or block light that tries to pass through it. Traditionally, LCD panels have used cold cathode fluorescent lamps (CCFL) as a light source. Inexpensive and readily available, they were used in everything from notebook computers to televisions.

But increasingly, LCD HDTVs have integrated LED backlights — which can have an effect on the picture quality, energy performance, and wallet.


The Advantage of a "Green" LED Backlight

Although cheap and easy, CCFL technology has one critical flaw — the lamps contain significant amounts of mercury, which is a hazardous material. This creates problems from birth to earth, starting with manufacturing and ending with the eventual disposal or recycling of the display.

LEDs don't contain hazardous materials, which eliminates most of the recycling and disposal problems. As a bonus, LEDs are more efficient at turning electricity into light, which can result in power savings compared with CCFL backlights. As a result, the LED backlights can be friendlier to the environment through safer materials and energy efficiency — the latter of which means potential energy savings for the consumer.

LED Configurations and How They Effect HDTV Width

Some sets use a matrix of white LEDs behind the LCD panel, which requires substantial space for the mixing and diffusing of the light from the individual LEDs to avoid hot spots.

Consumers have expressed a preference for thin televisions, however, so the designers have come up with a way to mount the LEDs along the edge of the panel. Very thin light guides then distribute the light evenly across the back of the LCD panel. Some manufacturers have demonstrated 42" LCD panels as thin as 2.6mm, which is about the thickness of a sheet of corrugated cardboard. Edge-lit LED backlights make this possible.

Initial edge-lit LED backlights used four bars of LEDs, one on each edge of the panel. As LEDs have improved in brightness and the light guides have become more sophisticated, it's now possible to light just two opposite edges. Fewer strips mean fewer LEDs, better energy efficiency, and lower manufacturing costs.

The ultimate is to have a strip of LEDs along just the vertical edge of the panel, and on just one side. LG Electronics demonstrated just such a 42" panel at the Society for Information Display conference last May; the set only drew 35 to 40 watts of power when operating, which is about half that of a single typical household incandescent light bulb.

In addition to the thickness of the panel, there are other consequences to choosing between a full-matrix or an edge-lit LED backlight design. The key difference is how "dynamic contrast" can be implemented.

"Contrast" refers to the difference between the brightest and darkest parts of an image that the screen can display. If the LCD backlight is on constantly, some of the light can leak through the liquid crystal layer when it's supposed to be showing "black," which reduces overall contrast.

Engineers came up with the idea that if you turn the backlight down — or even off altogether — you increase the effective contrast of the image because the darkest parts will look darker. Since this is not a constant condition, we refer to "dynamic contrast" for cases where the backlight output is changing in response to the contents of the image.

If you have a full-matrix LED backlight, you can dim portions of it to create light and dark regions just about anywhere on the screen. If you use an edge-lit design, you can only dim the backlight in bands, either horizontally or vertically across the screen. This can limit the effectiveness of dynamic contrast.

For environmental reasons alone, CCFL backlights are rapidly being replaced by LEDs in LCD displays. LEDs are also being used increasingly for home lighting applications; as a result, worldwide production capacity has increased rapidly. This in turn has helped encourage innovation and drive prices down.

At this point, you still pay a premium for an LCD HDTV with an LED backlight compared with one with a CCFL backlight, although it's difficult to find comparable models since CCFL units are typically confined to the entry-level designs while LEDs are used for sets with more features. (If backlighting isn't mentioned in the specs for a model, it's likely that it features CCFL technology.)

For now, if you want to pay as little as possible for an LCD HDTV, a CCFL model is your best bet. But if you want to get better performance and energy savings, without any hassles down the road when it comes to recycle the set, it may be worth going for one with an LED backlight. And if energy efficiency is of extreme importance to you, consider specifically snagging an edge-lit LED LCD HDTV — just remember its limitations in terms of dynamic contrast.

randelcole
That's all fine and good but there is no point talking about image quality without also addressing picture quality.  And to talk about picture quality, the plasma display must be discussed as well.  As a professional filmmaker, I look at a lot of displays and there is no question that plasma, which is organic vs. electronic in its imaging, provides a more pleasing and filmic look when compared to LCD or LED/LCD.  So, if movies are a primary viewing choice, then a plasma display still offers a superior image quality.  If sports and soaps are the main viewing choice, then LCD will give a more immediate and in the action perspective.  As for energy consumption and imaging burning, plasmas have improved greatly in both areas, as well as in a smaller footprint.  Is plasma as "green" as the LCD/LCD, I'll let other be the judge but we buy display screens first and foremost for picture quality.
July 19, 2011