We examine the pros and cons of different types, so you can pick a product that (hopefully) gets your cat's approval.
BY:
JESSICA HULETT
DealNews Contributing Writer

Cat litter may not be the sexiest topic out there for a buying guide. For cat owners, though, finding a litter that keeps both them and their furry friends happy is the secret to coexistence (along with scratching posts).

If you're welcoming a new kitten or cat into your home or simply aren't crazy about the litter you're currently filling the box with, you have a lot of options — everything from clay to walnut shells. We break down the pros and cons of every cat litter type out there, so you'll have a better idea of where to start. 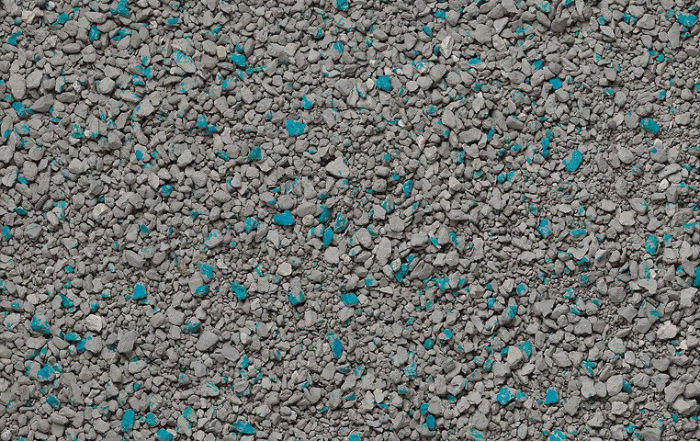 The first cat litter to hit the market in 1947 was clay, and it's been the most popular ever since. It's available in both scented and unscented types; the unscented varieties usually contain either charcoal or baking soda to help with odor control.

Pros: Non-clumping clay litters are inexpensive and widely available. You can find them at your local pet store, supermarket, or convenience store.

Cons: The litter usually has to be replaced weekly — more often than clumping litters — because urine can collect in the pan and cause odors. Clay litters tend to be dusty as well, which can be a problem for cats and humans alike. Also, they're heavy, although lightweight formulas are now on the market. Lastly, clay litters are not biodegradable or sustainably sourced. 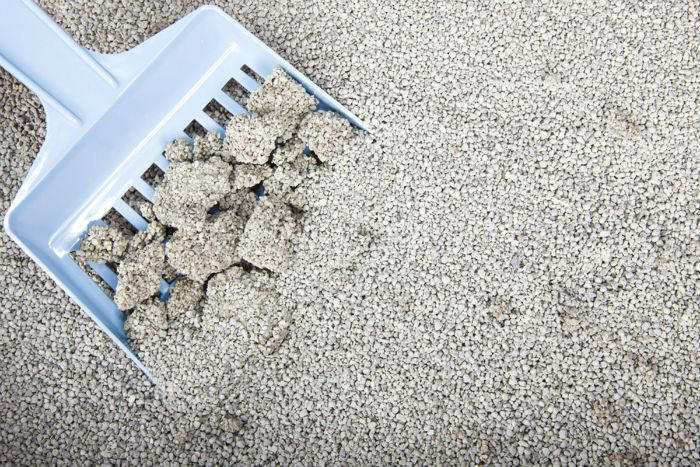 Clumping Clay (Scoop Away, Ever Clean)

A step up from regular clay, clumping litters typically contain bentonite clay, which forms lumps when it comes into contact with urine. This enables the cat owner to simply scoop out the urine like the rest of the solids.

Pros: Clumping clay is easy to scoop and keep clean. You can usually go one month without having to completely replace the litter in the box. It's also inexpensive and widely available.

Cons: Like with non-clumping clay litter, dust can be a problem, and this litter is not environmentally friendly. Some people have expressed concern about the safety of cats ingesting clumping cat litter — either from inhaling dust while using the litter box or licking granules from paws. However, no links have been scientifically proven between this type of litter and any illnesses. 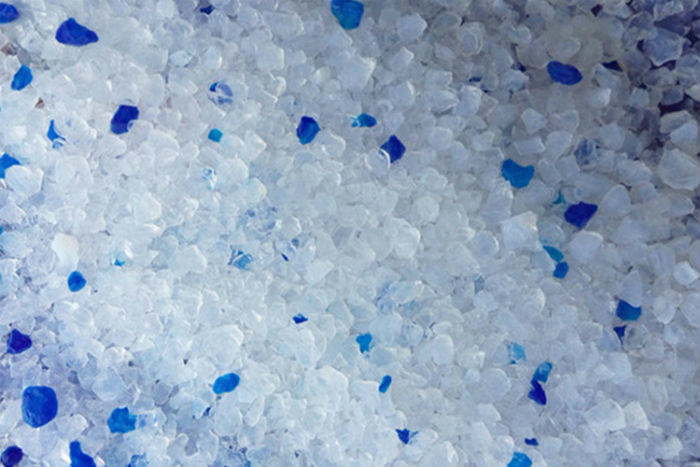 Crystal cat litter is made of silica gel — the stuff that comes in freshness packets. In addition to keeping your vitamins fresh, it absorbs moisture and odors, making it an effective material for cat litter.

Pros: Crystal cat litter is virtually dust-free, and you can generally go one month without having to replace it. Because this litter type has larger granules, cats don't track it around the house the way they do with more fine-grained litters.

Cons: Crystals are more expensive than clay and not as widely available. Like with clumping clay litter, there is some concern about the link between silica gel and respiratory illness, but scientific research hasn't proven it. Many cats don't like the way the larger granules feel on their feet. Likewise for humans — if granules get kicked out of the box and you step on them with bare feet, well, ouch. 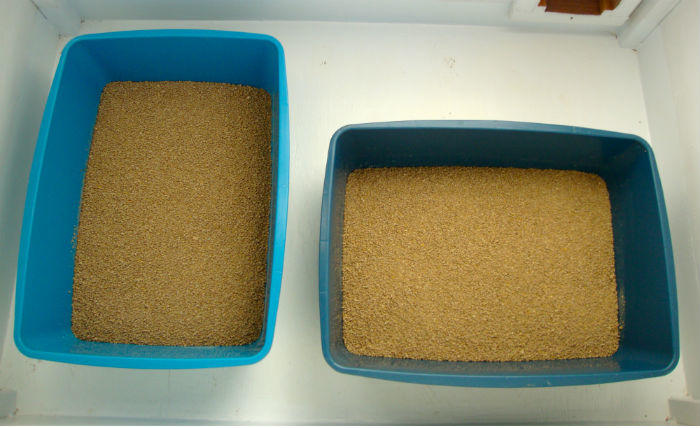 Corn litters are the most popular natural alternative to clay. They're made of — you guessed it — corn. To illustrate this point, World's Best Cat Litter has made videos featuring people eating corn litter, which is as hilarious as it is gross.

Pros: Corn litter is biodegradable and flushable, though your state may have laws about flushing it. It also tracks less than clay, and has good odor control and clumping benefits.

Cons: This litter type is more expensive than either clay or crystal litters; it may also be harder to find. Many cats don't like the texture of corn litter on their paws, and pets and humans alike may not be crazy about the strong corn scent. The safety of corn has also been called into question due to a toxin that commonly grows on it. While this has resulted in recalls of pet foods containing corn, it has not proven to be an issue with corn-based cat litter.

Several newer types of cat litter on the market are made of recycled and biodegradable materials. Devotees love that they're highly absorbent, dust-free, and control odor like clay and crystals — all while being a safe and environmentally friendly alternative.

On the con side, they are much more expensive and harder to find, require more frequent changes, and may lead to a tough adjustment for your cat. Here are the types and brands you'll find at the pet store or online:

2 Ways to Switch Your Cat's Litter

Switching cats to a new litter is not a cold-turkey affair, especially if your pets seem to like the one they're using. There are two approaches to trying a new litter type:

Approach 1: Start by mixing in small amounts of the new litter with the one your cat's used to. Over time, increase the amount of new litter. If you make the change slowly enough, your cat might not even notice.

Approach 2: Buy another litter box, fill it with the new litter, and place it next to your cat's usual box. He or she may be curious enough to try it without prompting, and you'll be able to gauge interest in the new brand.

Cats are often specific when it comes to what they like and don't like, but studies have shown that most cats prefer clumping litter. That doesn't mean you can't try other types, but it does mean you may have to resign yourself to the fact that your cat is ultimately going to be making the final decision, not you. Hopefully you and your furry friend can settle on a litter that will make you both happy for years to come — and you won't have too many messes to clean up before you find it.

Readers, what cat litter do you use? Do you like it? Have you ever tried to switch brands? Let us know about your experiences in the comments below!

Ardbeg
If you like corn litter (World's Best), there is a MUCH cheaper alternative: chicken starter or crumble. Because that's basically what it is, chicken starter with some baking soda and scent added.

World's Best is over $1/lb, starter is 1/4th that, $12-15 for 50 lbs from Tractor Supply or a feed store. Yes, that's a lot, we keep the extra in a Sterilite bin in the garage. Don't get the medicated/fortified, this is litter, not food. We mix baking soda with a few drops of citrus oil (Amazon, $8 for 4 oz, almost a lifetime supply) in a shaker to be kept nearby.

The crumble is finer, which means it clumps better but is far dustier and tracks worse. The starter looks identical to World's Best but is also a bit dustier (I'm guessing they run there's over a screen filter to make it more consistent). We settled on starter, have used it for years in the South and have had no bug problems from it, though we do keep a couple of roach baits nearby just in case.

OZ Cat AZ
Tidy Cats Breeze System. Forget about clumping, scooping up messes, adding more product, etc. Yes it might be more expensive, but all I do is scoop the poop! Nothing else. It's paid for itself in not wasting time, energy, adding more litter, and dealing with messes daily. My cat took right to it. Since she likes to pee in the same area, I turn around the tray that holds the pad at the end of the week. This is what the urine drops down in to. The pellets do an excellent job of keeping the smell at bay. After removing the poop, I mix them so all get blended & none stays in one place. This keeps them from getting too smelly too soon. When they do, it's time to replace. Only having 1 cat, I replace every 2 months. Then I also disinfect the system which comes in 4 sections making it easy to clean and add a new bag of pellets.
I've gotten friends into this & they love it. So instead of spending about 15 minutes daily, I spend about 15 seconds. Which would you rather do?
July 24, 2016

BargainsOnly
I used a wheat one once & the litter box had mold growing in it.
July 24, 2016

Enough-enough-ENOUGH
Arm & Hammer Clump & Seal rocks! Tried most (esp clumping) brands over 3 decades and by far prefer the A&H litters as a whole, but Clump & Seal has proven the best yet. Easy 4-6 weeks between changes with almost no odor and minimal dust.
July 23, 2016

celynnen
another con for the eco-friendly types of cat litter is that they can bring other pests into your house, like moths and carpet beetles, depending on where and how long they were stored before arriving at your pet store.
July 22, 2016

Bradster
"...you may have to resign yourself to the fact that your cat is ultimately going to be making the final decision, not you."

LOL. Anyone who has cats has already resigned themselves to this principle. We don't live with cats, they live with us.