Take a Swing at Boxing: Essential Equipment to Get Started

Beginners can start with affordable equipment like a jump rope; more advanced boxers can get deals on gear for sparring.
BY:
TOM BARLOW
DealNews Contributing Writer 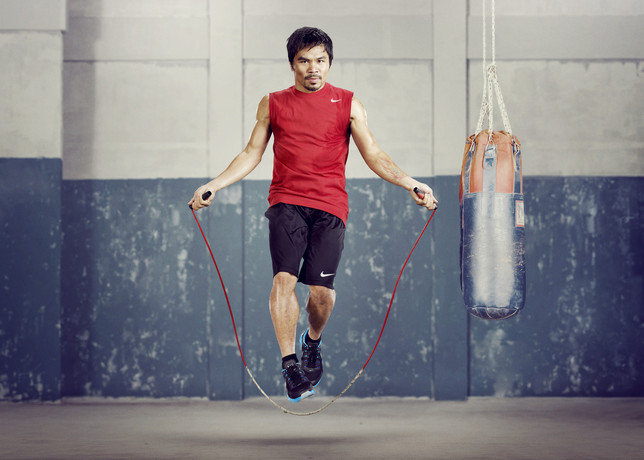 Before Pilates, before spinning classes, and before the StairMaster, there were athletes who subjected themselves to the most rigorous training because their sport of choice tasked them like none other. The "sweet science," boxing requires athletes not only to endure 3-minute aerobic rounds, but absorb and throw punches that would sap the strength of the mortal man. It's no wonder, then, that many of today's athletes enjoy boxing workouts. Many have found that with the pain comes something scarce in other workouts — a little fun.

Build up to Boxing with Basic Training

Some boxing exercises are fairly routine. Push-ups develop arm and back muscles. Varieties of the crunch will build strength in the abdominals, which can absorb a lot of punishment in the ring. (Cameras love to show head blows, but in boxing, shots to the trunk and arms tire the opponent, causing him to drop his hands low enough to enable those head shots.) Mike Tyson, for example, did 2,000 sit-ups a day when in his prime, along with 500 to 800 dips and 500 push-ups. Boxers were also jogging back in the day when the only people running outdoors were kids. Cardio helps with leg strength and endurance; the exercise bike is an alternative to running that will accomplish the same end.

An exercise particular to boxing is hand strengthening. As the delivery agent for a properly aimed blow, the hands take a pounding. The stronger they are, the less the chance of injury. Gripping devices can help keep those digits undamaged.

The medicine ball is another commonly used exercise device in boxing training. Medicine balls can be used to add extra weight in calisthenics, or tossed around to strengthen the upper body. They come in a variety of weights, but a 10-lb. ball is a good intermediate size for a variety of workouts.

To build up your cardio endurance, try the under-utilized jump rope. A boxer jumping rope is cliché, but for good reason: it's a great way to build muscle, endurance, and most importantly, coordination and footwork. (Keep in mind the last time you jumped rope you may have only weighed 50 pounds; at your adult weight, you'll find it's a great deal more work.) You could use a length of cotton clothesline, but you'll probably be a lot happier with a jump rope that has ball-bearings and a firm grip, like this 9' Champion Heavyweight Nylon Jump Rope ($7.95 with $9.97 s&h, a low by $7).

Once you've gotten strong and mastered the basics, it's time to move on to the exercises that are essential in learning how to box. Perhaps the most fundamental of them is shadow boxing, which involves using a variety of punches against an invisible opponent. This builds up arm strength, speed, and the ability to bob and weave to properly support your blows and deflect those of your opponent. A few minutes of vigorously thrown jabs, crosses, hooks, and uppercuts are an intense workout.

Another drill that will help you develop punching power while shadow boxing is the use of a resistance band such as Black Mountain Therapy Exercise Bands ($19.99 with free shipping via Prime, a low by $2). By stretching this around your back, then holding the handles in your hand while throwing punches, you can build up those boxing muscles. 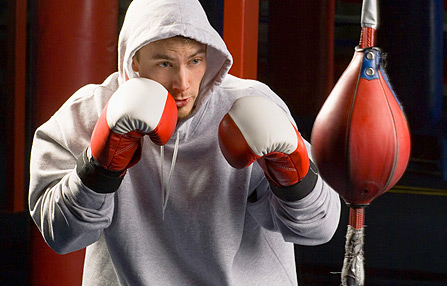 Time to Get Physical! Equipment You Need to Start Throwing Punches

Of course, one of the delights of the boxing workout is you actually get to hit something! Plus it's a great way to burn off any frustrations you might bring to the gym. Before you begin punching other human beings, though, you'll spend a lot of time punching inanimate objects, namely the punching bag.

There are a few commonly used punching bags in boxing workouts. The speed bag is the most colorful. You've probably seen videos of pros using a speed bag, a small (8" x 5" or so) gourd-shaped bag suspended from above that hangs pendulant, just inviting a crisp blow. These bags, mounted so that the bottom of the bag is even with the bridge of your nose, force you to keep you hands very high, which is good practice for fighting a taller opponent.

The speed bag is meant to do just that: teach you how to punch quickly. To that end, a good session on a speed bag will find you using both hands in a circular motion to keep up a flurry of punches that sends the bag flapping around like a flag in a hurricane. The sound and the sensation can be quite exhilarating. Luckily, the bags are not prohibitively expensive. (In fact, most boxing equipment is modestly priced.) The Majik Over The Door Speed Bag Trainer ($14 with $4.97, a low by $18) will allow you to set up your own speed bag corner in your home gym.

The heavy bag is the other piece of boxing-specific equipment you'll want to train with. It's a tall cylinder of a bag that approximates the mass and texture of an opponent. Sparring with a heavy bag will allow you to work on delivering quick, powerful blows, practice your footwork (short steps, weight evenly distributed), all while learning to protect yourself from counterblows. Most heavy bags are suspended from above, but if this isn't practical for your home gym, there are freestanding alternatives, like the Everlast PowerCore Freestanding Heavy Bag ($82.89 with free shipping, a low by $26).

If you train with a partner, you might want to take turns practicing punches on one another. For this exercise, the recipient of the blows can wear large pads called focus mitts on their hands, perfect for blocking the thrown punches.

In the same vein, you'll want to take care of your hands while doing bag work. A simple way to protect your hands is to wrap them in a heavy elastic material. On top of the handwraps, boxers don the quintessential boxing gloves, like these Everlast Neoprene Heavy Bag Gloves ($16.99 with free shipping via Prime, a low by $2).

For many people, a basic boxing workout is a challenge and it certainly will result in a fit, toned body. Some athletes, however, choose to put their skills to the test sparring with a live opponent. This undertaking requires you to invest in a few more pieces of gear. To avoid injury, sparring boxers wear headgear and a mouth guard. Yes, there is the possibility of injury while boxing, but with proper care, the right equipment, and professional instruction, this is greatly minimized.

There is something fundamental about boxing as a sport; you can't buy better equipment to make up for lack of talent and commitment. At the end of a good boxing workout, you're left not only pleasantly tired, but at peace, having had the opportunity to KO all the frustrations kept penned up. And you need never confess whose face you were imagining on that heavy bag.