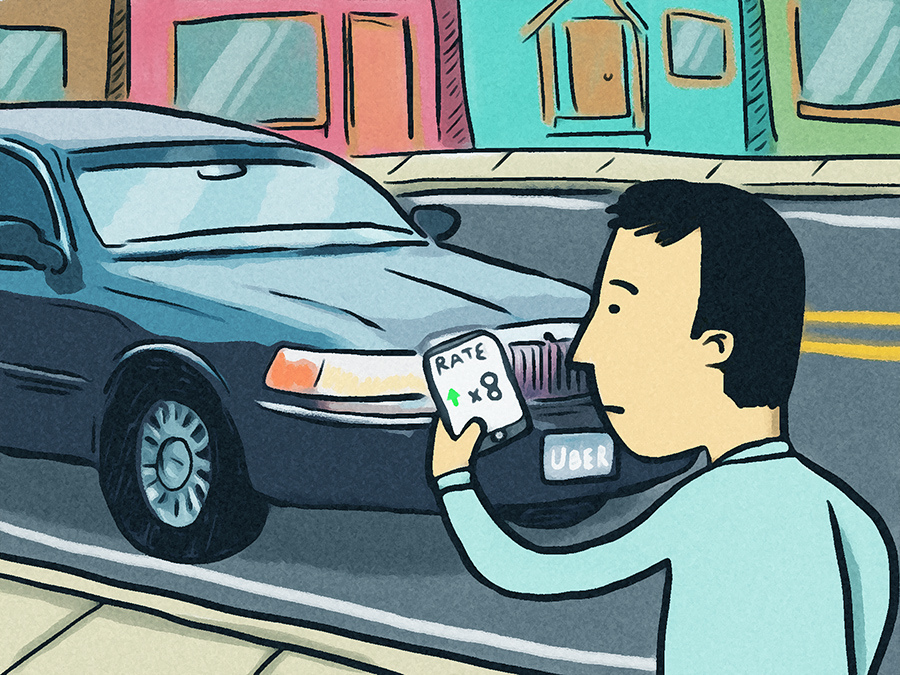 If you don't live in one of the 70 cities worldwide served by Uber, you might not be aware of the rideshare program and taxi competitor. Uber users can hail a variety of cabs – from cans to luxury SUVs – all from their smartphones. The app even handles payment and keeps riders up to date on when their ride will arrive. Uber has effectively eliminated a lot of the annoyances associated traditional taxi and car services, allowing folks to get where they're going faster.

But there is on area in which Uber doesn't excel: consistent pricing. Taxi costs are regulated. Uber costs are not. Uber is blazing new economic trails with what it calls "surge" pricing. Surge pricing is the result of higher demands and effectively keep more Uber drivers working on busy nights or during inclement whether. Hailing or calling a taxi during surge pricing situations is obviously much cheaper, but often requires a lot of waiting — if you can find a ride at all. Uber insists its pricing algorithm is in place to maximize the number of rides available rather than to maximize profits, effectively helping match drivers up with people in need of rides.

While Uber's pricing model seems fair, in practice surge pricing can cost Uber riders a lot more than expected. While the Uber app does display surge rate riders will likely to pay, no one enjoys paying $400 for a ride across town. And though people have complained about price gouging during snowstorms or on New Years Eve, for example, demand for Uber rides has remained high, and it seems that most customers don't object too much.

However, there are some concerns that Uber is gaming its own system. Recent reports suggest that in certain situations, Uber may not be activating new drivers to meet rider demand thereby triggering surge pricing. Uber denies this is the case, but with ongoing complaints about high prices, we'll have to see if cost-conscious customers stick with the company.

Perhaps in response to the latest dose of bad press, Uber lowered its fares on low-cost UberX rides, and will soon be offering push notifications informing users when surge pricing ends in order to alert would-be riders who aren't willing to pay surge prices. But with the marketplace for smartphone-powered ride services is heating up thanks to similar services Lyft and Sidecar offering rides at lower costs, customers have the option to let their wallet do the talking — all without having to resort to hailing an ordinary taxi. So, will you continue to use Uber? Or have you branched out to other rideshare services? Tell us in the comments below!

jpsharman
I don't see how this is any different than rental car companies, airlines, hotels, utility companies, trains, etc - all charge higher prices during "peak" times. This is not a new thing and it's not unethical - Uber shows you rates up front, you know what you're going to pay.

I used them daily on a trip to San Francisco last month, and the ease of payment along with being able to stand in one place and order a cab with an iPhone app made it completely worth the higher cost of a cab. Convenience costs more, this is nothing new either.

Don't get the hullabaloo about this whole thing to be honest.

Hadoukin
Not a company I want to support. Look online and read what unhappy customers have to say about them. Here's one example: http://valleywag.gawker.com/...facebook-1485891066
March 4, 2014

It's $6 off and at the best price we've seen since Black Friday. Buy Now at Amazon

Coupon code "PZR14CPS" drops this to $12 below our mention from last week. Buy Now at Proozy