The organization is bolstering its digital retail presence with help from Visa and Dell. Are you more or less likely to buy the cookies if they're online?
BY:
STEPHEN SLAYBAUGH
DealNews Contributing Writer 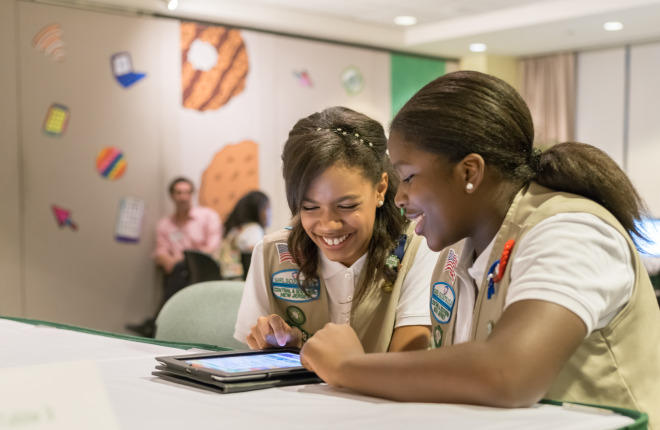 Until last year, the only means by which to buy Girl Scout cookies was the old-fashioned way: waiting until the parent of a Girl Scout harassed you at work, and then committing your Thin Mints order to paper with a ballpoint pen.

But with new financial backing, the Girl Scouts are making it easier than ever for their scouts to sell — and for us to buy and eat — their cookies.

The Girl Scouts Are Online, But Few Troops Have Participated

In January 2015, the century-old Girl Scouts of America (GSUSA) organization launched an app by which scouts could take credit card orders. The organization also launched the My Digital Cookie platform for the girls to create their own websites.

In its first year, though, only approximately 160,000 of the organization's 1.88 million girls used the digital resources to sell 2.5 million of the 194 million boxes of cookies sold. So this year, GSUSA has partnered with Visa and Dell to expand their online efforts.

Here's Why You'll Probably Buy Your Next Box of Cookies Digitally

According to The New York Times, Visa and Dell have contributed an estimated $3 million to update GSUSA's digital platform, which included adding games, videos, quizzes, and music. Dell has also donated hundreds of tablets to underprivileged scouts and plans to supply close to 4,000 tablets and computers by 2018.

GSUSA is hoping that the increased digital participation will bolster cookie sales, which fell by about a million boxes last year. To do so, they will have to overcome a price increase from about $4 to $5.

In addition to the resources for scouts to sell cookies, GSUSA also has a Cookie Finder app for iOS and Android to help customers locate sales in their neighborhood. Some may wonder why GSUSA doesn't just sell directly to consumers from its website, but these tools are meant to bolster entrepreneurship and encourage the girls to participate in the annual cookie sale by interacting with their communities.

What do you think? Are you more likely to buy from a scout using an app or a website? Let us know in the comments.

gizmovision
no, to online buying of cookies from the GSUSA. I'd like the money to go to local GS Groups instead of the national entity's 'causes'.
January 6, 2016

dsnake
I appreciate the interaction and entrepreneurial aspects
January 5, 2016