Get Some Deals to Keep Your House Cool 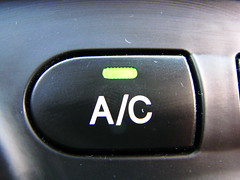 With summer's scorching temperatures on the way, Americans may have at least one energy reprieve in sight; gas prices are already so high that forecasters predict a price dip in time for Memorial Day — perhaps 15 cents a gallon or more.

Still, there's another energy consumption quandary to consider this time of year: keeping our homes cool. Air conditioning, while it's long been a favorite way to quash the summer heat, can also squash your wallet. Americans spend more than $22 billion a year on electricity to cool their homes with air conditioning — and use a whopping 183 billion kilowatt-hours, according to the U.S. Department of Energy. That accounts for at least 15% of all energy used in some homes, and in warmer climates can represent up to 70% of your summer electric bill.

I'm not asking you to give up your beloved air conditioner if it keeps you cool and dry during an insufferable heat wave. But you can stay smart while saving dough. This week we examine ways you can beat the heating bill, and cool off cheaply. Just because the thermometer will soar doesn't mean your debt has to follow suit.

1) Install some ceiling fans. Ceiling fans use only 15 to 95 watts depending on speed and size, while a window unit air conditioner uses 500 to 1440 watts—and a 2.5-ton central system uses about 3500 watts. That's a massive amount of energy and suggests that if you use air conditioners alone to cool your home, you're not thinking in economic or environmental terms.

Ceiling fans start at about $40 a piece and you can find them at just about any hardware store. Home Depot stocks more than a dozen models of Hunter fans below $120. The nice trick to ceiling fans is that they don't need to run while you're out of the room. The fan cools you by triggering evaporation from your skin. Since the fans force hot air down and away from you, using a ceiling fan will make you feel anywhere from 3 to 8 degrees cooler. Cooling tower fans work great, too, and you can get this NewAir Evaporative Cooling Tower Fan through the Sears Marketplace for $99.

2) Use economical gadgets that maximize your comfort. Many people who run air conditioners in their bedroom, for example, also sleep under a thick bedspread. How crazy is that? Covers, of course, trap body heat. So you can run an expensive central AC just so you can be comfy in bed … or simply use a gadget like a Bed Fan. It's a small, gentle fan that operates right under the covers. You can order one for $80 at Brookstone. Or, get chill with a "Chillow." The Chillow is a water-filled pillow that keeps your head cool while you sleep. You can either sleep directly on it or put it inside a pillowcase. You can order one for $25 at Amazon.com. You can also, of course, just get some cool new sheets and ditch the heavy blankets.

3) Keep direct sunlight out of your home—and cold air in. Why create more heat to beat when you can simply shut out the excess, and keep the frosty stuff from escaping? Direct sunlight can raise room temperature by 10-20 degrees. The less heat gets into your home, the less you have to pay to remove it. Step one: Use drapes to block sunlight and heat. (Blinds also work, though not as well.) You can also use reflective window film on your windows, which can block 40-60% of heat without blocking light, so you can still have nice, bright rooms. Film costs about $3-$7.50 per square foot installed, or you can get the material from a home improvement store for about $1-$2 per square foot.

Step two: Use do-it-yourself weather stripping for doors, and caulk for windows. Both remedies are easy to install and cheap. Also make sure to caulk around the holes where pipes go into the wall under sinks.

4) Let there be (less) light. Standard incandescent bulbs create a lot of heat, which your AC system has to remove. Replace your lights with compact fluorescent (CFL) bulbs, which use 75% less energy and create 70-90% less heat at the same time. Regular lights give off 10% light and 90% heat, while CFLs give off 90% light and 10% heat. And here's a green stunner: According to the Union of Concerned Scientists, if every U.S. household replaced just one incandescent bulb with a compact fluorescent, it would prevent 90 billion pounds of greenhouse gas emissions from power plants, the equivalent of taking 7.5 million cars off the road.

I've switched over gradually and for most uses in my home, fluorescents work just fine. This year, I'll go all the way and realize a savings of $30 in energy costs over the life of each regular bulb I replace. Regardless of what kind of lighting you use, turn it off when you're not around. It doesn't just use electricity, it also adds heat.

5) Hit the showers. Yes, it's true: Cool showers can help keep you comfortable for quite some time afterward. Right before bedtime is an especially opportune time to jump in, as it sets the stage for a restful night's sleep.

Now if you're thinking there's a green tradeoff here, you're correct: It does take some energy to make sure that shower isn't ice cold. To that end, my buddy the Lazy Environmentalist, Josh Dorfman, recommends a low-flow showerhead called the Evolve Roadrunner, because it boasts good water pressure and an intelligent water-saving feature: Once the water heats to 95 degrees, water slows to a trickle until you pull a lever. At $29.95 from a vendor like EarthEasy.com, the Roadrunner pays for itself in about a year.

6) Delay your household chores. Any heat generated in your home has to be removed by your cooling system, so avoid creating heat around the house whenever possible. Your dishwasher, washer and dryer give off heat when they're in use, so run them in the early morning or late evening. Your air conditioner won't have to work as hard to offset the heat produced by the appliances. What's more, running those appliances during off-peak hours reduces the stress on the power grid, helping to prevent brownouts. You might also pay less for the electricity if your utility charges less per kilowatt-hour during non-peak hours.

7) Replace those old window units with newer air conditioners. Today's ACs use 30-50% less electricity than 10-year-old models. Check out this Energy Star document to figure out the right-sized air conditioner based on a room's size. The key number here is the Energy Efficiency Rating (or EER): The higher the EER, the more efficient the unit. So if you replace an old EER 5 unit with a new EER 10 unit, you'll cut your cooling costs in half. You should also look for the "EnergyStar" and "EnergyGuide" labels when purchasing a window unit. An energy-efficient unit will cycle the compressor on and off so that it doesn't operate continuously. U.S. homeowners can also get a 30% tax credit for installing an EnergyStar-rated AC. If you shop at a major retailer having a sale, you can pick up discounts easily.

8) Use a programmable thermostat, and clean those AC filters. You can reduce your annual energy bills by about 10% by turning up your programmable thermostat 10º to 15º F when you're out of the house, according to the U.S. Department of Energy. You can pick one like this Honeywell 5-2 Programmable Thermostat at Home Depot for under $30. EnergyStar-qualified models use about 25% less power than ones made before late 2000. To make those thermostats work even better, make sure you are cleaning those filters on your AC units at least once a month. A good rule of thumb is to replace these filters every 90 days to keep them working at peak efficiency.

Lou Carlozo is dealnews' new Green Dad columnist. He was most recently the managing editor of WalletPop.com and, before that, a veteran columnist at the Chicago Tribune. Follow him on Twitter— @LouCarlozo63. You can also sign up for an email alert for all dealnews features.

rc71
You are correct mcdruid.  But you can compromise.  Reflective paint is expensive, but if you buy a QUALITY white paint, keep in mind it's going on the roof, which will do a similar thing just not to the same degree as reflective paint, but at a much lower cost.  Also, you might need to cover the entire roof if one side is constantly in the shade.
May 14, 2011

mcdruid
I have read (although not in an authoritative source) that the use of reflective paint on your roof can lower the temperature inside your house by 5-10 degrees. It looks like the paint costs about $700 to cover a 1200 sq foot house.
May 14, 2011

VIEW ALL
Blog · Morning Jolt · 9 hrs ago
5 Deals You Need to Know Today: Discounted Outdoor Power & Lawn Equipment at Amazon
Amazon has five lawn and outdoor power tools discounted for your purchasing convenience. Check out this offer and more in our roundup of the five best deals we found over the last 24 hours.
Blog · Buying Guides · 3 days ago
What's the Best Time to Buy Big-Ticket Items?
Savvy shoppers are always on the lookout for a great deal, and to help you out, we've put together guides on the best times to buy big-ticket items.
Blog · Buying Guides · 4 days ago
Ask an Expert: When Can I Expect a Price Drop on the TV I Want?
Do you have a question for us experts here at DealNews? If so, submit it and we might just answer it in a future column! Until then, check out our first column, which offers advice to a cost-conscious TV shopper.
Blog · Buying Guides · 4 days ago
59 LGBTQ-Owned Businesses You Can Support This Year
June is Pride Month, so if you're looking for a spate of LGBTQ-owned businesses to support with your wallet, we've got you covered! Check out our guide for 59 shops to check out now, as well as tips on how to find more.

Save an extra 10% on already discounted kitchen items with coupon code "MEMORIAL10". Shop Now at Target

It's $10 below our mention from three weeks ago and the best price we could find now by $10. Buy Now at eBay

It's a savings of $5 off list. Buy Now at Walmart