General Mills Says 'Cheerio, GMOs,' But Do You Even Care?

Cheerios are no longer made with GMOs. However, it remains unclear as to whether this change will cause more companies to make the costly shift over to non-GM foods.
BY:
MICHAEL BONEBRIGHT
Former Senior Blog Editor 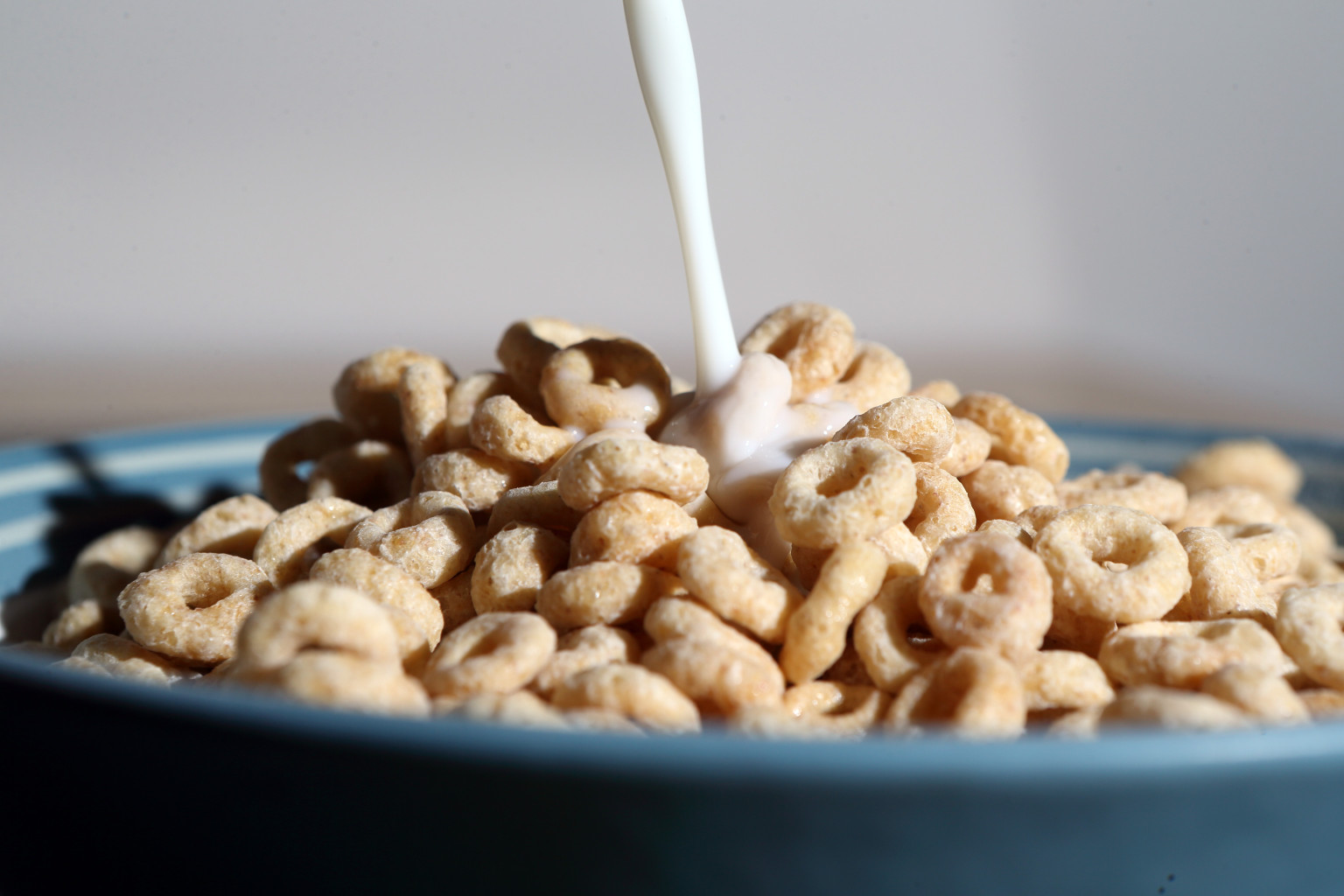 No longer coming to breakfast tables across America: Cheerios containing genetically modified organisms (GMOs). Anti-GMO advocates are hailing the change as a major victory. But critics say the move is just a corporation cashing in on a cause célèbre.

There's no question that the GMO debate is a complicated one, full of botanical intricacies that baffle the casual observer. We'd like to know if General Mills' decision to leave GMOs out of Cheerios will affect your buying habits, but first we'll explore the controversy that's headed for a supermarket aisle near you.

Cheerios Have 'Not Really' Changed

Before everyone gets all up in arms, Tom Forsythe, General Mills Vice President of Global Communications, would like you to know that the Cheerios you know and love (or at least eat if you find them in the pantry) have not undergone a big transformation. "Did we change Cheerios? No. Not really," Forsythe explained in the General Mills blog. "Original Cheerios has always been made with whole grain oats, and there are no GMO oats. We do use a small amount of corn starch in cooking, and just one gram of sugar per serving for taste. And now that corn starch comes only from non-GM corn, and our sugar is only non-GM pure cane sugar."

If the predominant ingredients in Cheerios remain the same and General Mills' official position on GMOs remains the same (hint: the corporation approves of them), then why bother switching over to non-GM ingredients? According to Forsythe the company believes "consumers may embrace it."

However, Wired called the switch an "empty gesture," and said that General Mills was just "exploiting consumer fears to sell more cereal." Plus, as the article points out, only original Cheerios are losing their GMOs: "Those Honey Nut Cheerios your kids prefer? Those may still be made with mutant sugar." Whether the decision to remove genetically modified ingredients was motivated by altruism or a more base emotion, there's no denying that General Mills is one of the largest companies to even half-heartedly embrace the production of non-GMO foods.

For those optimistic anti-GMO readers thinking that the Cheerios change will soon usher in an age where mainstream grocery stores are filled with non-modified foodstuffs — don't hold your breath. However popular the idea may be, switching from GM to non-GM ingredients can be prohibitively expensive. Taking the GMOs out of Cheerios "required significant investment," Mike Siemienas, a General Mills spokesman, told the Wall Street Journal; making the cereal's other varieties without GMOs would be "difficult, if not impossible."

It's worth noting that the arguments in favor of abandoning genetic modification are not necessarily backed by the scientific community at large. A group of scientists, among them two Nobel laureates, recently wrote an editorial for Science in which they came to the defense of GM foods. "New technologies often evoke rumors of hazard. These generally fade with time when, as in this case, no real hazards emerge," the editorial read. "But the anti-GMO fever still burns brightly, fanned by electronic gossip and well-organized fear-mongering that profits some individuals and organizations."

Whether you approve of GMOs or not, we're sure to see at least a few more non-GMO foods in the not-too-distant future. As we previously mentioned, Chipotle is moving away from using GMO cooking oil and plans to pass the costs of this transition over to customers. If Cheerios and Chipotle see a boom in business after abandoning GMOs, more companies may decide to follow suit.

But what do you think, readers?

brcbedard
The true fight against gmo has nothing to due with health. To make something a gmo you CHANGE it and because you CHANGED it you are then able to patent it.Now you own a living organism and can prove with a dna test that you own it, Plant that crop in the open and the pollen will travel. (most owners of the patents claim that wind, animals, and insects do not widely distribute pollen) and if your gmo pollen pollinates a neighboring field and that neighbor raises a crop for sale and saves seed for the following yr, the gmo owner can take them to court for raising crop they own putting the neighbor(or small farms) out of business. Happens all the time. Result is that about 95% of all major food crop seeds are owned worldwide by only 5 companies and every yr we lose more of our 'heirloom" varieties.
January 13, 2014

cstoney04
Wait, so current cheerios has GMO crap in them? Why wasn't I aware of this. There's a huge surgeon general warning lable on cigarettes, we ban guns in school because someone might get hurt, and I can only buy 87 or higher octane gas as anything less "might" be bad for my car, but I'm not told if my food as been altered so as to withstand harsher chemical treatment???? WTF. I'm done feeding my toddlers this crap. I've got 8 boxes of unopened cheerios, for free, if anyone wants them. My children's lives are not something I want to gamble on.
January 13, 2014

vwoom
Ever heard of the "Revolving Door" interplay of Chairmanships between Monsanto, FDA and EPA...and GMO is deeply involved in this.

Wolfman
Wasn't there a boycott of Cheerios after they aired a commercial featuring an interracial couple with a mixed race child? If so, maybe they're trying to get some lost business back.
January 10, 2014

vstus
Just read this:
"... well-organized fear-mongering that profits some individuals and organizations"

Surely GMO garbage does NOT profit some corporations, Monsanto or GM foods to name two, or no.
The level of hypocrisy of some prostitute "scientists"!
January 10, 2014

Maxdaddy
People are usually pretty stupid about this subject. They don't do their homework and usually just follow political banter instead. The truth of the matter is, GMO organisms may or may not necessarily harm you on their own, but the fact they have been genetically modified to resist pesticides is the real problem. If you are eating GMO crop you are eating pesticised no way arround it. So if you don't think pesticides like round up are bad for you, well there is nothing in your stupid mind that i can tell you to help you wake up. Because your stupidity is inherited and there is nothing we can do to change your genetic make up!
January 10, 2014

Familycircus
I agree that it's just the new popular thing to worry about. I have a good friend who is a farmer with a Master's degree. He said we've always genetically modified things to improve them. He isn't concerned so I'm not.
January 10, 2014

Tacopilot
I believe there probably is nothing wrong with most GMO products but is is an unnesissary game of Russian roulette. Eventually if we play long enough we will find the one that has the bullet. I have not bought a box of Cheerios in decades but this week I made it my go to cerial with my first box....guess what it was good too.
January 10, 2014

dcobranchi
Given the option, I'd buy non-GM food. Unfortunately, it's not a requirement in the US that food be labelled as containing GM materials.

I applaud General Mills' publicity stunt. If, as I'm sure they expect, it leads to increased sales of Cheerios, other manufacturers will notice.
January 10, 2014

c0boy
People need to become more educated on our food chain supply and food in general in the United States. Like every industry it is driven by profit and lobbied by companies with big pockets. While there are very little long term studies on GMO's, our food supply can be directly correlated to obesity, disease, etc. Since the 50's when things like GMO's were introduced, as well as other chemicals, packaged foods, dyes and such we have had a large increase in sickness and allergies. While this is not a scientific study it doesn't take a scientist to speculate that there is something wrong with our food supply. Our food kills more people than guns every year, I don't see moms marching about our food.
January 10, 2014

vwoom
"Frankenstein" (GMO) foods should be avoided at all costs and must identified/labeled as such. The Anti-GMO is HUGE outside the US and is banned in several countries. Only here in the US, where it is downplayed as "nothing" (to make the American Public oblivious to its effects) as the US Mainstream Media is influenced in one way or another, by these big companies benefiting it's use.
January 10, 2014