This makes the discounts seem better than they really are.
BY:
ERIN CODUTI
DealNews Contributing Writer 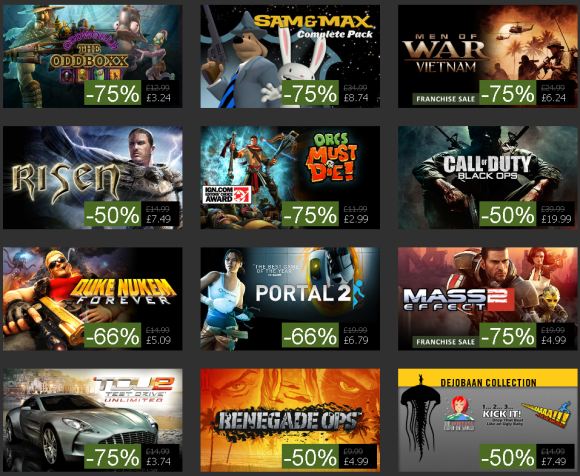 Many PC gamers eagerly await the Steam Summer Sale, delaying purchases in hopes that a coveted title will drop in price. Seeing a hefty discount can make buying seem like a no-brainer, but you may want to look twice to be sure you're actually getting a deal.

Some developers have inflated prices ahead of the sale, making their supposed deals a lot less compelling than they seem at first glance. Here's a list of titles that savvy consumers have caught fiddling with prices.

Grand Theft Auto V for PC at 25% off? Sounds great! But look again — the discount is for a bundle that includes a "Great White Shark Cash Card" that the developers say makes the bundle 25% more valuable. It's actually still $59.99, the same price as the undiscounted game alone. If you buy the game without the card, there's no discount.

In addition, some consumers have raised concerns that the inclusion of the cash card may make the game ineligible for Steam's new refund policy. The policy allows easy no-questions-asked refunds on games or DLCs purchased within the last two weeks with under two hours of playtime, but there's an exception for in-game purchases from third-party developers. If you try the game and don't like it, getting the "discounted bundle" could leave you unable to get a full refund.

War Thunder, a free-to-play Steam game, relies on DLC purchases for funding. Its most expensive DLC, the Ace Advanced Pack, mysteriously jumped from $39.99 to $49.99 in early June. Their Dora Advanced Pack also jumped in price from $19.99 to $29.99, but in March. While the Ace Advanced pack isn't on sale yet, the company is on shaky legal ground if it is put on sale.

While most consumers will agree that these companies' actions are misleading and distasteful, it's still worth asking, "Is this legal?" The answer, sadly, isn't a straightforward yes-or-no. In the US, if the price comparison is found to be "fictitious," then yes, these companies' actions were illegal. But whether or not a price is deemed fictitious depends on how long a former price was maintained, how many sales were made at that price, and a few other factors. If you feel that these companies have priced their products deceptively, your best course is to file a complaint with the Federal Trade Commission.

Did we miss some price shenanigans? Let us know in the comments.

kyungone
thank you for calling them out... sadly not just steam developers all B&M stores (especially shopping malls, brand stores) are doing this as well...
June 16, 2015

jmchiejr
Rocksmith 2014 is on flash sale but once you factor in the cord, not included, you might as well buy it on Amazon.
June 13, 2015

jcauthorn
Thanks for calling them out! I'm glad you have the history to show what's going on.
June 13, 2015

mattb47
The moral of the story? % off deals are often meaningless. The current price is what matters. Whether it's Steam, or Kohl's (another % off manipulator), Amazon, whatever.

Not that Steam doesn't actually have some good real no-BS deals right now...

hippyirish
This was the case with a lot of the items. I thought some of them were glitches. The best example I've seen is the XCOM Enemy Within DLC. They have it retailing at $49.99. It never retailed at that price. Check for historical price data at steamprices.com.

It's the lowest price we could find by $15. Use coupon code "GARDENHOLIDAY" to get this price. Buy Now at eBay