From Jetpacks to Galaxys: The Tech Universe of Engadget's Darren Murph 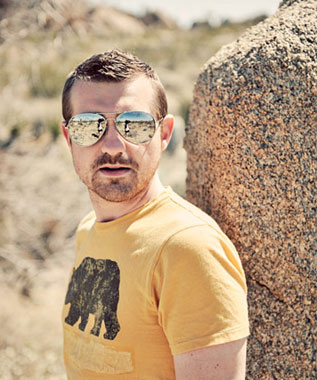 While most of us scratch our heads as the big manufacturers foist countless digital goodies into the marketplace, intrepid journalists like Engadget's Darren Murph (pictured) jump into the fray, ready to try, test, and pass judgment. It's a good thing, too, since Engadget's managing editor has a stamina and passion for all things digital that doesn't seem to falter.

"In any given month, I probably touch 20 to 30 gadgets," Murph says, "but I'd say only about 10 are in my bag no matter where I go. I can't travel without at least two phones, two mobile hotspots, my 15" MacBook Pro, a NEX-C3 camera, and my trusty Kensington Contour backpack." (Can someone get this high-flying tech dude a cape, too?)

Because devices stack up on Murph's desk without end, dealnews was lucky to snag a few minutes with him to talk about the five gadgets he can't live without. If you're wondering how any gizmo makes Murph's cut: "It needs to instantly prove that it can accomplish a task either markedly better than a prior gadget or more efficiently. It's all about sheer speed and performance, and doing either ahead of expectations."

Here, then, is Murph's list of five tech gadgets that truly wow him. After you're done reading be sure to send him best tech wishes, as this week marks his 6-year anniversary with Engadget.

Murph says that these are "the best iPhone-friendly 'buds south of $450." They boast a super-wide frequency response of 5Hz to 19kHz, making for amazing clarity; Murph adds that they sport "a great inline remote/mic and insanely comfortable oval eartips." And talk about light: They weigh in at just a pinch over 0.3 oz.

This mirrorless, SLR-like camera sells for about $530 to $600, and Murph says he is "constantly blown away at the sharpness present in photos from this compact shooter. Though it "suffers in low light — as any shooter would that isn't a pro-level DSLR — you can't beat the quality and speed for this price. It's now my go-to travel cam." Engadget colleague Zach Honig also raved about this camera: "We have an opportunity to test an enormous variety of gadgets each year, including dozens of point-and-shoot and DSLR cameras. Seldom, however, do we come across a device that we undoubtedly plan to purchase ourselves."

This geotagging module for Nikon DSLRs is among the most popular of the devices. "It has world-class GPS acquisition times, with a minimal drain on battery life. There's nothing quite like using this on a trip and then displaying your favorite shots automatically across a Google Earth or Picasa map."

Maybe the bespectacled Verizon Guy on those annoying TV commercials is worth listening to for a change. "This is the first LTE hotspot that hasn't dropped connections like crazy," says Murph. He also raves about the the extended battery back option, which keeps it running for 5+ hours. He highly recommends this as a go-to device for road warriors; the Jetpack 4620 also supports 3G in non-LTE areas.

The news was just a few days old at press time: the Galaxy Nexus is back on sale in the U.S after a software workaround that bypasses Apple's objections to the phone. "It's wildly cheap for a high-quality unlocked GSM smartphone, and it's ready to accept any global SIM for those who routinely switch countries," Murph notes. (Wildly cheap? We'll say; Amazon currently charges an all-time low price of just 1 cent, with a new 2-year contract.) "It's also compatible with Android 4.1." That's the new version of Android, Jelly Bean, which the Nexus will be eligible to upgrade to later this month. It's also a value as an unlocked option, as Murph adds: "The unsubsidized price on a 'Pure Google' device is just crazy. Best deal going on a powerful, unlocked GSM phone." (A 16GB model running the current Android Ice Cream Sandwich 4.0 currently sells in the $400 price range.)

Intrigued by any of Darren Murph's picks, but hoping they'll drop even further in price? Consider setting up an email alert to learn as soon as we list future deals for them.

Lou Carlozo is a dealnews contributing writer. He covers personal finance for Reuters Wealth, was most recently the managing editor of WalletPop.com, and before that a veteran columnist at the Chicago Tribune.