The only difference between the iPad mini 3 and the mini 2 is a new color option and Touch ID. But the mini 2 is also $100 cheaper.
BY:
LINDSAY SAKRAIDA
DealNews Contributing Writer 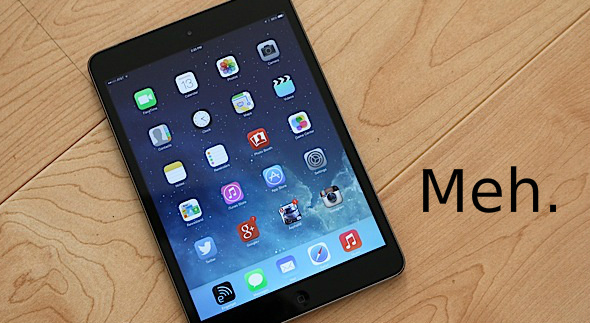 Blink, and you could have missed it.

During Apple's event today, Tim Cook and crew barely mentioned the iPad mini 3; in fact, they uttered a few short words about the new device, despite previously spending at least 10 minutes fawning over the updates on the iPad Air 2. Why, exactly, did Apple downplay its own product announcement? Probably because the iPad mini was barely updated at all.

The update mainly seems underwhelming since Apple also declared that it would keep selling the iPad mini 2 (previously known as the iPad mini with Retina) at a lower price point; the mini 2 will now sell for $299, while the brand-new iPad mini 3 will check in at $399. But what does that extra $100 get you? Not a whole lot, it turns out.

Although the iPad Air 2 got some serious spec upgrades, including a significantly faster processor, the only difference between the mini 2 and mini 3 is the inclusion of a Touch ID sensor on the start button, and the fact that you can choose the color gold as an option. That's it.

The fingerprint sensor on the mini is admittedly cool, and if you're a fan of gold, then this new option is surely great. But for the vast majority of tablet seekers, these two upgrades don't warrant the extra $100. When it comes down to it, unless you really want those two perks, you'd be far wiser to save the money and opt for the cheaper iPad mini 2.

Readers, what do you think? Is the iPad mini 3 worth it?

asdf123456789
the thing that most people overlooked is that the new batch of iProducts (ex. iPhone 6) is that Apple got rid of 32 gb storage and now for the same price a 32 gb you can get a 64 gb device. If you want an iPad mini retina with 64 gb so you can use it for lots of things like movies, and big games its about 350 while the new iPad mini which like stated in the article, is barely better is about the same. SO for the same price you can get a newer iPad with touch ID. Keep in mind you can probably get a better price for the retina display.
January 9, 2015

Califas
Via dealnews we have seen and I purchased a iPad mini 2 for $200 at target. No refurb necessary. Be patient, the deals will come.
October 20, 2014

jsshapiro
I just picked up a Factory Refurbished iPad Mini 2 for $249 via Apple.com - comes with 1 year factory warranty and 14 day return policy! A Steal of a Deal!
October 20, 2014

Where did you read that it has double the RAM? Most reliable tech sites are listing this as unknown still; Apple didn't announce RAM, it's not present as a spec on their website, and typically we can only know this information for sure once there's a teardown from the likes of iFixit, which hasn't taken place yet. So there's isn't yet confirmed proof that it has more RAM. Engadget, for example, lists RAM as N/A. And while we're unsure of whether this is reliable, GSM Arena is actually already reporting 1GB RAM which is the same as the mini 2.

As for the touch sensor, yes, we agree that this technology might be more useful in the future, but emphasis on "might be" and the nebulous "future." Is that worth $100 to most people? No. The touch sensor on my phone is cool but I would skip it entirely if it required an extra $100 to get. And as for the A7, we're not arguing that it's not sufficient; but again, the mini 2 also has it.

Greg the Gruesome
@Vinny C: I think whoever told you that the Apple Store you visited will have its stock of the iPad mini 2 shipped back to Apple was mistaken. The online Apple Store is still offering the first-generation iPad mini!
http://store.apple.com/us/ipad
October 17, 2014

Not quite right. The Mini 3 also has twice the ram compared to the equivalently-priced Mini 2. As for the touch sensor, it's is a pretty big deal, and will be even more usable in the future. One could complain that the Mini 3 doesn't have an A8 processor, but since the screen is smaller than the iPad Air, An A7 is •more• then enough processor. It will run very fast indeed.

A hundred bucks for twice the ram, a touch sensor and very capable processor (even if the same A7 as the Mini2) seems well worth the price to me.
October 17, 2014

MrMojo
"Although the iPad Air 2 got some serious spec upgrades, including a significantly faster processor, the only difference between the mini 2 and mini 3 is the inclusion of a Touch ID sensor on the start button, and the fact that you can choose the color gold as an option. That's it."
^
Basically, THIS!

You pay the extra $100 for the branding of getting a newer iPad mini 3 with the aforementioned items.
Owning Apple products is more of a status symbol and more about bragging rights than anything else.

"If it ain't broken, don't fix it!"
Like many businesses, Apple does NOT listen and tries to make consumers pay more just for the sake of owning one of its overpriced products.

Guess Apple has to release something as it finally has competition in the smartphone and tablet areas where it once dominated.
October 17, 2014

Vinny C
I just checked into my local Apple Store, and they are selling the 64gb iPad mini Retna at 399 (just bought) and the 128 for 499... Since they are the same as the newer models, and the associate told me they are planning to ship back their stock in the next few days, I'd say these are the steal of the announcement
October 16, 2014

Around Xmas/Hanukkah I'll be grabbing whatever iPad Mini 2 refurbs are out there to replace my girlfriend's original Mini (which has gotten tired, and needs the digitizer replaced for $140 and change).

The new Mac Mini, though...may replace my older Mini with a single core 2.5 GHz i5 processor. Then I'll use that one as a glorified Apple TV or something on my sailboat.
October 16, 2014

nimer
Well said Lindsay! I too was surprised, it still has the same A7x processor that iPad Mini 2 has. In case of the Air, I can see the $100 gets you a thinner lighter device, touch Id, gold color option, and 40% faster thans to A8x processor.

It's at an all-time low and the best shipped price we could find today by $6. Buy Now at Amazon