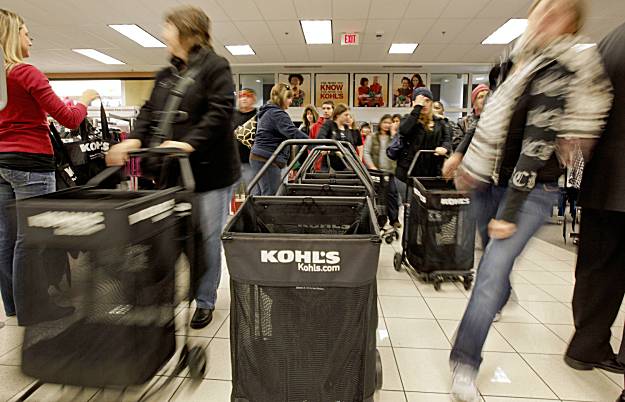 Kohl's announced last week that it will be opening its first outlet store, selling returned merchandise at 70% to 90% off. The move is the latest by a large department store to compete with deal-hungry shoppers and the rise of off-price retailers; it shows how the off-price trend is now affecting chains once thought to be reasonably-priced alternatives themselves.

Fortune reports that the 30,000 square-foot store will open in Cherry Hill, NJ (near Philadelphia) in June.

Kohl's isn't the only store making the shift: Macy's, the standard-bearer for massive, full-price department stores, announced earlier this month that it will open four NYC-area "off-price stores" under the name Macy's Backstage.

Outlets were once reserved only for luxury stores looking to offload out-of-season, overstocked, and slightly damaged inventory. Nordstrom Rack, Saks Fith Avenue OFF 5th, and Neiman Marcus Last Call are a few of the successful luxury retailer outlets that have existed for years.

But since the recession, shoppers have shied away from designer goods at retail prices, instead seeking out deals wherever they can. While department stores like Macy's, Kohl's, Sears, and JCPenney have seen sales plummet and stores close, discounters like TJ Maxx and Marshalls (both owned by TJX) have challenged or even increased their numbers of locations and overtaken those upmarket rivals in sales. (Similarly, Dollar General has seen explosive growth while much of the retail sector suffered.)

At the same time, outlets themselves have changed. Instead of selling merchandise passed along from the main store, most merchandise in outlets is now produced specifically to be sold at the outlet chain (at lower cost and lower quality, usually).

But the Kohl's outlet will be more like an original outlet, at least to start: It will sell inventory that has been returned by customers, at steep discounts. What's surprising, and telling, is that an already affordable retailer is looking to go even further down market.

Readers, what are your favorite outlet spots? Let us know in the comments below!

VIEW ALL
Blog · Morning Jolt · 3 hrs ago
5 Deals You Need to Know Today: Discounted Outdoor Power & Lawn Equipment at Amazon
Amazon has five lawn and outdoor power tools discounted for your purchasing convenience. Check out this offer and more in our roundup of the five best deals we found over the last 24 hours.
Blog · Buying Guides · 3 days ago
What's the Best Time to Buy Big-Ticket Items?
Savvy shoppers are always on the lookout for a great deal, and to help you out, we've put together guides on the best times to buy big-ticket items.
Blog · Buying Guides · 4 days ago
Ask an Expert: When Can I Expect a Price Drop on the TV I Want?
Do you have a question for us experts here at DealNews? If so, submit it and we might just answer it in a future column! Until then, check out our first column, which offers advice to a cost-conscious TV shopper.
Blog · Buying Guides · 4 days ago
59 LGBTQ-Owned Businesses You Can Support This Year
June is Pride Month, so if you're looking for a spate of LGBTQ-owned businesses to support with your wallet, we've got you covered! Check out our guide for 59 shops to check out now, as well as tips on how to find more.

That's the lowest price we could find for a similar chair by $42 and $15 under our mention from a week ago. Buy Now at Amazon

Apply coupon code "MAY20" to save an extra 20% off almost 300 pairs of men's pants, which are already heavily discounted. Shop Now at adidas

That's the best price we could find by $25. Buy Now at eBay