Facebook Wants You to Talk to Stores Through Its Messenger App

Shoppers could get push notifications for order status updates without downloading individual store apps, but will retailers adopt the service?
BY:
LOU CARLOZO
DealNews Contributing Writer 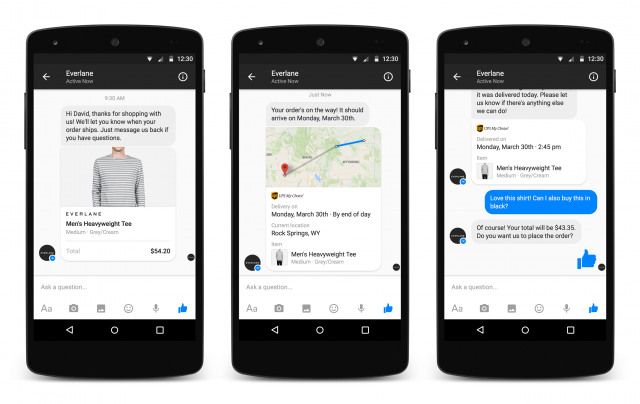 Will consumers "like" the mix of retail and Facebook that's slated to arrive via a new service called Businesses on Messenger?

Facebook announced this planned next step for the Messenger app Wednesday at its F8 conference. In essence, it turns shopping and customer service into a text-driven experience through the social network's messaging function. When placing an order through a retailer that uses BoM, a shopper should receive confirmation and order updates in a single message thread in the app, rather than receiving multiple separate emails. Think of it like an archived timeline of every step in the process, including discussions with customer service reps.

Thus the static online purchase procedure — almost universally a three-step process of select, check out, and pay — now promises to evolve into a conversation. Just as with any chat among Facebook friends, the back-and-forth can resume at a later time. But in a retail setting, this means paving the way for future purchases.

Will Enough Stores Join the Program?

Still, huge questions remain for Facebook and the shoppers it hopes to reel in via the new service. To begin with, there are only two retailers on board so far, though it's too soon to tell how much momentum Businesses on Messenger stands to build among the retail community. Even in the B2B space between Facebook and future clients, it often takes time for a new service to "go viral."

At launch, two retail operations had signed on as — to borrow a phrase form the tech world — early adopters. (Curiously, Facebook's own press seems underwhelming and flat, as they pitch it this way: "Businesses on Messenger will initially launch with a couple of partners.")

At least one of those businesses seems like an odd choices. The clothing and apparel site Zulily is known for being cumbersome with shipping — with some items taking weeks to arrive. (Apparel retailer Everlane is also signed up for the service.) Messenger won't necessarily clean up that act, in which case the experience could be less than optimal, giving a black eye to Facebook just as the new service gets off the ground. Although BoM could potentially improve customer service, it won't necessarily which means this could become just another portal for bad consumer experiences.

But even if shoppers turn away in droves, it's safe to say Facebook could win big in this space — at least before other digital giants try to copy their simple formula. For starters, Facebook Messenger boasts a 600-million-person install base. And as Fast Company reports, "[That] has the sort of scale to make the idea very big, very fast." Plus, Facebook is experimenting with "buy" buttons in user feeds, so retailers might be motivated to participate with BoM as well. (That said, we're somewhat doubtful that the likes of Amazon will join in.)

On the consumer end, any new technology raises a host of questions, starting with "Can I trust this?" That's an excellent query, given Facebook's past fumbles with privacy settings and the ever-present temptation to collect big data via Messenger and market it back to retailers.

Shoppers may also be weary of having to deal with another technology wrinkle in what used to be a smooth, simple process. For starters, users may shy away given that Facebook has now unleashed 40 new apps as part of Messenger. For those weary of information overload, outright dismissal before they even get on remains a distinct possibility. Add that to the potentially sloppy redundancies between the Messenger service and store apps already in a smartphone, and consumers may remain content to stick with what they know.

There are potential advantages, too. BoM could offer push notifications and alerts about the status of your orders, eliminating the need for downloading more store apps for every order you place. If those notifications get annoying, chances are you will be able to turn them off in most cases.

Ultimately, that huge cross section of Facebook fans and frequent shoppers will judge the system's success. Either way, you can count on raves or gripes on status updates all across the virtual marketplace.

gizmovision
Most of the stores I deal with have their own app, and if not UPS and FedEx keep me informed when my orders on the way via email and/or text message. The USPS is the worse on giving tracking details. As for keeping up on whats new I have an email in box for daily deals from merchants. The social networking sites are good for PR releases...Something I used to get all the time from companies was a Press Release now I get a blogger rewriting a story about it, calling it news...
March 28, 2015

VIEW ALL
Blog · Marketplace · 10 hrs ago
How to Create Coupons on Amazon
Amazon brought coupons to Seller Central in 2017, but these aren't your grandmother's coupons. Learn how to create coupons on Amazon, and what to know before you do.
Blog · Buying Guides · 1 day ago
6 Simple Ways to Renovate Your Kitchen Through Home Depot
If you're feeling like your house needs a refresh, consider these simple ways to do a Home Depot kitchen renovation. You can update your look and potentially increase your home's value!
Blog · Buying Guides · 4 days ago
What's the Best Time to Buy Big-Ticket Items?
Savvy shoppers are always on the lookout for a great deal, and to help you out, we've put together guides on the best times to buy big-ticket items.
Blog · Buying Guides · 6 days ago
Ask an Expert: When Can I Expect a Price Drop on the TV I Want?
Do you have a question for us experts here at DealNews? If so, submit it and we might just answer it in a future column! Until then, check out our first column, which offers advice to a cost-conscious TV shopper.
Blog · Buying Guides · 6 days ago
59 LGBTQ-Owned Businesses You Can Support This Year
June is Pride Month, so if you're looking for a spate of LGBTQ-owned businesses to support with your wallet, we've got you covered! Check out our guide for 59 shops to check out now, as well as tips on how to find more.

Save on flash drives, memory cards, and hard drives. Shop Now at Amazon

There is a base discount of up to 90% off, plus there are a selection of coupons that can be added for further reductions in certain conditions (see list below.) Shop Now at Homary

That's the best price we've seen for any Series 5 watch including those without 4G cellular. You'll pay at least $499 for a new model. Buy Now at eBay