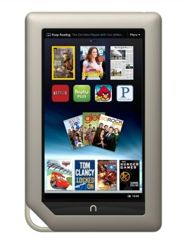 Amazon's Kindle Fire has been skyrocketing its way to the top of the tablet charts, recently surpassing Samsung as the number two tablet vendor in the world (behind Apple, of course). So in an attempt to extinguish Amazon's Fire, yesterday Barnes & Noble unveiled its new 8GB NOOK Tablet for just $199, which meets eye-to-eye with Amazon's price point. This aggressive, and perhaps desperate, move by B&N marks the start of a no-holds-barred tablet war with Amazon. But should NOOK fans jump on this "price cut" or is there a chance we'll see better deals in the near future?

To find out, we analyzed previous NOOK announcements to see when this new tablet will most likely start seeing discounts. The first NOOK 7" tablet, which came with 16GB of storage, debuted for pre-order last November for $249, but it wasn't until last week that we saw an actual discount on the device when we listed it for an all-time low of $199 via eBay Daily Deal (now expired). Sure, we had seen it bundled with gift cards prior to this deal, but this was the first dollar-off discount we'd seen on the device itself.

So it's taken three full months to see the first discount on the 16GB NOOK tablet; and interestingly enough, that deal came just a week before the release of the new 8GB NOOK. We saw a similar pattern with the original NOOK 3G eBook Reader, which dropped from $249 to $199 just before the announcement of the $149 WiFi-only NOOK. Also in line with the eBook readers, this second tablet will receive a smaller price tag by way of lesser specifications; the new 8GB NOOK tablet offers just 512MB of built-in RAM (versus 1GB on the 16GB model).

So How Long Will You Need to Wait Exactly?

Deal-savvy consumers that are interested in buying the new tablet are then probably wondering: how long will it take to see a deal? Well, the chances of the new tablet receiving a discount from B&N in the near future are very slim. Though it's easy to find plenty of B&N coupon codes and discounts in any given month, in the past neither of these types of sales has ever applied to the NOOK. Therefore, if the new 8GB NOOK follows the same trend as its 16GB counterpart, we can expect the first notable price cuts to come rolling in around late April. In the meantime, look for offers that come with a gift card of up to $25.

Ultimately, tablet hunters who are strapped for cash would be wise to wait for Apple to announce the iPad 3, likely in early March. Following that, we posit Amazon will react to its competition with a price cut on its own Kindle Fire, and price cuts on the legion of Android tablets which are already vying with the iPad. In that atmosphere of budget-friendly options, you'll be able to see if the newly affordable NOOK tablet is still the best slate for you — and whether it's worth waiting for a deal.

VIEW ALL
Blog · Buying Guides · 1 hr ago
Apple Black Friday 2021: What Deals Can You Expect on Your Favorite Devices?
Apple items are known for being high-quality, but also for having high prices. Want to save on Apple around Black Friday 2021? It should be a great time to get deals on your favorite i-products, as long as you know where to shop.
Blog · Morning Jolt · 1 hr ago
5 Deals You Need to Know Today: A Free Photo Print at Walgreens
Physical photographs are back and they're free at Walgreens. Check out this offer and more in our roundup of the five best deals we found over the last 24 hours.
Blog · Buying Guides · 1 day ago
Black Friday Phone Deals 2021: What iPhone and Samsung Galaxy Offers Can You Expect?
November is the one time of year when you can expect to find a great deal on a smartphone. Check out our guide to Black Friday smartphone deals, and see what discounts you should look for in 2021.
Blog · Roundups · 1 day ago
The Best Video Game Deals
The best of the best when it comes to video game deals, cheap consoles, and discounted accessories are gathered here, in one convenient roundup.
Blog · Roundups · 2 days ago
The Best Men's Clothing & Accessories Deals
From adidas to Uniqlo and Allen Edmonds to Wilsons Leather, this is your guide to the best men's clearance sales, designer clothes deals, and everything discounted in the world of men's clothing.

That's the best deal we could find by $27. Buy Now at Walmart

Apply coupon code "TAKE25" to save an extra 25% off already heavily discounted items, which includes over 500 items for men and women. Shop Now at Marmot

That's the best price we could find by $37. Buy Now at Amazon

That's a $80 drop form last month, $622 off list, and the best price we could find. Buy Now at Dell Technologies

Save on over 100 dress shirts, with prices starting from $8. It includes brands such as Hugo Boss, Lauren Ralph Lauren, Polo Ralph Lauren, Tommy Hilfiger, and more. Shop Now at Macy's