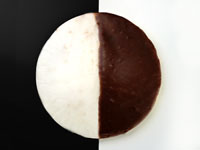 The concept behind the term "contrast ratio" is pretty simple: You measure the brightest part of a screen, and then you measure the darkest part, then you divide the bright number by the dark number. This gives you a ratio between the two measures. The bigger the number, the more difference between bright and dark on the screen. Simple, right? Are we done? Not by a long shot.

Why Contrast Ratio Is So Important
In practical terms, the brightest area of an image will be white, and the darkest area will be black. Of the two, it turns out that the black level is probably the most critical factor. If it is not really black, but rather is just a dark gray, this affects the rest of the image. The colors will look washed out or faded, like a photo print that has been left in the sun too long. If this is the case, it doesn't really matter how bright the whites are.

On the other hand, a deep velvety black — like outer space at midnight — can make the colors on the screen pop, looking much crisper and more vibrant. Why do you think they use black velvet for all those Elvis paintings? Sounds great, but there can be some drawbacks depending on the ambient light.

If you have a smartphone, you have no doubt experienced this effect. Your phone screen probably looks pretty good under normal indoor lighting conditions, but take that same screen outside in sunlight, and the bright ambient light overwhelms the display. The blacks look gray and the colors are washed out.

Math Matters
There's a mathematical reason that black levels are so important. Let's say we've measured a hypothetical screen and it has a brightness measure of 100 and a darkness measure of 10. (We'll assume that we're using some arbitrary units.) Divide 100 by 10 and you get a contrast ratio of 10:1. Now we'll boost the brightness by 10 units to 110. The contrast ratio is now 11:1, which is not much of a difference.

But here's the problem; if we can turn off the light altogether in the black regions, then we get infinite contrast if the black level measures zero. That certainly would be nice to have, but it doesn't happen in the real world.

Not of This World
And that's the whole problem with contrast ratio specifications as provided by manufacturers; they don't use real world measurements to calculate them.

The standard way of measuring a screen's contrast is to place it in a dark room, put on a full white screen, and take the brightness measure. Then they put up a full black screen and take the darkness measure.

Some technologies, such as plasma and "dynamic" backlighting for some LCD models, actually turn the screen off during the full black screen. That is how some models get those contrast ratios in the millions to one. This doesn't mean that they don't have excellent contrast; it's just that they may not be thousands of times better than another set with a lower specification.

The problem is that we don't watch all white or all black images; they don't tend to make for compelling content. When you start mixing areas of different brightness on the screen, the light bounces around within the various layers of glass and other materials and "leaks" from one area to another. As a result, a single "black" pixel surrounded by "white" pixels will never be nearly as dark as the full screen measurement. (A white pixel surrounded by black pixels also won't be as bright as the full white screen, but as we've seen, that doesn't have as much impact on the contrast.)

A better way to test is to use a checkerboard pattern of black and white squares, take an average the bright and dark readings, and use that for your contrast calculations. The results will be much lower than the full screen measurements, but they are more useful for making an honest comparison between screens.

Do It Yourself If contrast is very important to you, but the published numbers aren't useful, what are you supposed to do when shopping for a television? The answer is simple: focus on the blacks.

Look for sets that have deep, dark blacks in their images. If you're looking at a plasma set, make sure that you are looking at it under the lighting conditions that you'll be using. They can look wonderful in a darkened room, but may not stand up well to bright room lighting.

For LCDs, look for blacks that hold up even when you looking from the side. Contrast is affectedly greatly by off-axis viewing, especially on lower-cost models, so look carefully at large screens where more than one person will be watching.

If you pick a screen with great blacks, you'll have one with a truly good contrast ratio, and the rest of the image quality will benefit.

NoSpam
Thanks for the informative article. As the contrast ratio seems like an extremely important aspect of picture quality (for me anyway), I've really wondered about the huge jumps from in the thousands to in the tens of millions... @Dougz also brings up some good tips.
June 27, 2011

AlfredPoor
Thanks -- I'm glad that you liked the article. Let me know what other topics you think I should cover, and please spread the word.

Dougz
Good info, but if it's too technical for you, you won't be all that far off if you just pick from among the upper tier of manufacturers and avoid those that seem too inexpensive.  If you do want to shop for something you might find easier to understand, then get the user manual (online) and review the features in each set and the look of the remote control.

When I shopped for a new LCD set a couple years ago, I found a significant variation in features, some of which I really wanted and a lot that I didn't care about.  In the end, we bought one that had the features we wanted from an well-known manufacturer.  We end up using the remote control and features every day and don't give contrast ratio a second thought.  I turned off all the Auto-junk and it seems just fine.  Unless you are a videophile with a critical eye, once it gets installed in your space, you will likely adjust to it and it will become the local Gold Standard.

uronacid
Black levels are one of the most important aspects of HDTV. It's important that the public is informed of the inconsistent measurements behind contrast ratios. I liked this article.
June 20, 2011

RobS
Why does Dealnews keep posting articles from this idiot? Not only is his description of the common measurement methodology wrong, his 'home measurement' recommendations are provably silly.  He says, "If you're looking at a plasma set, make sure that you are looking at it
under the lighting conditions that you'll be using. They can look
wonderful in a darkened room, but may not stand up well to bright room
lighting." Even a child would understand that a bright room may require you to lift the brightness, decrease the contrast, or make some other adjustment.

Would someone at Dealnews please put this joker out of his misery and back on the soup lines?
June 20, 2011