Don't Buy an iMac This Week! We May See a Cheaper Version in a Few Days

Rumors indicate that a new budget iMac could be announced as early as next week.
BY:
LOUIS RAMIREZ
DealNews Contributing Writer 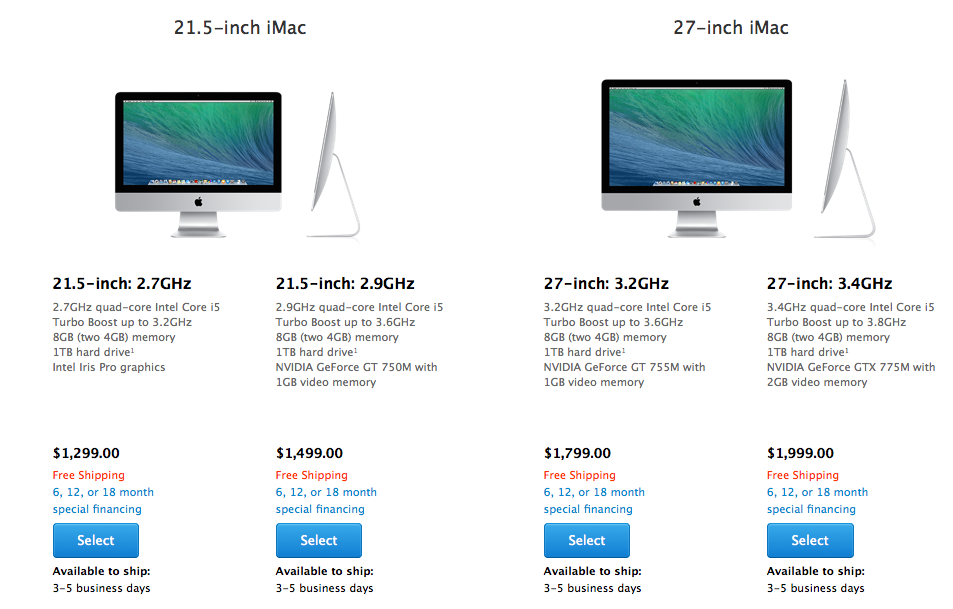 With less than seven days to go before the start of Apple's Worldwide Developers Conference, shipping estimates for Cupertino's all-in-one desktop are beginning to slip. As Apple Insider points out, the Apple Store is showing between a 3- to 5-day shipping delay on both the 21.5" and 27" iMac configurations. (By comparison, all other Mac computers ship within 24 hours.) Meanwhile, retail giant Amazon is undergoing an iMac shortage. It's currently sold out of its base iMac configurations, instead relying on third-party resellers to fulfill orders.

Though it's not one of the most talked-about rumors surrounding WWDC, today's iMac shortages could indicate that we'll see a budget iMac at next week's keynote. With iMac sales down, another price cut might provide the boost Apple needs to reinvigorate its iMac computer. And there is precedence for discounts, as Apple just recently slashed the price of its MacBook Air line by $100.

For consumers, this means now is the worst time to make an iMac purchase. A potential price cut and refresh would not only benefit early adopters in need of new machines, but it'll also trigger better deals on the current-generation 2013 iMacs, which, since their release in October, have yet to drop below $1,000. In fact, even refurb models of the 21.5" iMac have stagnated at $1,099.

So how much could a budget iMac cost? Although no one is ready to predict a price, many of today's Windows all-in-ones can be found for well under $999. Even if Apple doesn't match those Windows machines, a $999 price tag would still be cheaper than the iMac's current $1,299 base price. (It should be said, too, that items that aren't rumored to be getting a price cut would be a bad purchase this week; even if they merely get refreshed, consumers should be able to get a deal on the previous generation if they wait.)

So what do you think, readers? Would you buy a $999 iMac over a comparable PC? Let us know in the comments.

Greg the Gruesome
@dealnews-Lindsay It greatly inconvenienced rpartal, though.
June 2, 2014

Lindsay Sakraida (DealNews)
@sal.castro True, although, did it really hurt to wait a week to buy an iMac, just in case?
June 2, 2014

rpartal
Just bought one on the 14th thank god i saw this today on the 14th day, back to the apple store for a return and wait on the new one.
May 27, 2014