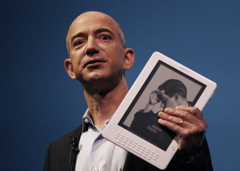 Okay, first off: Kudos to you for getting such media attention last week for your new device. The length of column inches I've seen written about this thing are astronomical. Very few devices can warrant that kind of coverage. Fewer still can get that kind of exposure even after all of the details were announced days before, so there were no surprises in store for anyone. Anyway. I realize that I'm generating even more press about this device and I want to limit that as much as possible, so I'll move on.

What's my gripe with the DX?

Let's start with the price. A sticker price of $489 is really expensive, man. And, unless you can convince Oprah to do another one of her, "I LOVE KINDLE!" once-in-a-lifetime coupons, we're never going to see any sort of discount on this thing, are we? Like, ever?

I dunno what your take-home is, but I'm assuming you have no idea what the average pre-college kid (half of your purported audience!) is making these days. Well, lemme tell you. The average federal-mandated minimum is $6.55 per hour. In order to save up for this device, a kid will have to work 75 hours ... then, they'll still have to buy the ebooks to go on it. I'm willing to bet that the majority of college-age kids will opt to save the $489 and just buy used books.

So, that brings me to my next sticking-point: Who is this thing for?

Clearly it's not for regular, working-class students, or their families. Good luck trying to convince mom and dad — who have taken out a second mortgage to cover the rising cost of education — to buy an electronic device that only does one thing: Display books. (Don't books already display themselves?) So, that cuts out a huge swath of your target audience, leaving, maybe, rich students and business people.

Let's start with business people, since targeting this thing to the "rich" demographic has far graver consequences, which I'll explore later.

Ok, so, you say your device — with its native PDF support — will let businesses get all paperless. Well, sorry, when I worked in a huge, soul-crushing office environment, it was like pulling teeth to get them to pay to replace the toner cartridges on the printer. I doubt they were going to buy me — and everyone else in the multi-national company — one of these so we could go "paperless."

Beyond that (yes, there's more), it doesn't do color. Yes, I know that color epaper is too prohibitively expensive to come anywhere near a consumer-acceptable price, so you don't get too much blame here. But, in business, they love their charts, graphs, and PowerPoint presentations — all in gaudy, eye-hurting color.

Now, imagine a full-color photo of a dissected human heart in a medical text. All those reds, greens, blues ... it's really like seeing it with your own eyes. But on the Kindle, it's a grey-tone mass — a very sharp and high-resolution mass, but still. Which is the better teaching tool for students?

Which brings us back to the remaining demographic: Rich College Students.

If that is your demographic, that's great. I'm not trying to stir up any sort of class warfare here. But I will say that if this Kindle DX thing does take off, you are going to slowly, but surely, ruin the secondary market of textbooks. As the well-to-do students convert to digital books, there are fewer used copies showing up in college books stores. Fewer second-hand copies means that the students who cannot afford the full price books are out of luck. Over time, the used books market will disappear. What do you say to the regular students who will now have no choice but to buy the new copies and strain their finances even more?

But this is great news for you and your publishing pals, right? After all, you guys don't see a dime off re-sold used books, do you? What about the kids who can't afford your device and thus cannot afford the "discounted" ebook versions of their textbooks? (Assuming there is even going to be a discount for the etextbooks, that is ... textbook publishers are notoriously greedy, and will probably charge full price, even though they've just saved themselves the cost of printing.) The outlook is bleak. And your device getting a market-hold would make that scenario likely.

Now, what about your plans to hand out a MESS 'o these things to incoming college students? Well, at last report, you've earmarked just 300 of the devices for distribution to only six select schools. That's 50 units per school. 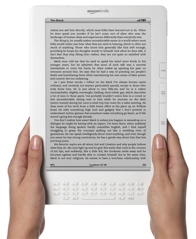 One other, side note, about target audience: We at dealnews all consider ourselves to be gadget-o-philes, yet a quick, informal poll of the office reveals that no one wants this thing. Of course, our business doesn't need to go any more paperless — I can't tell you the last time I printed anything for work — and almost none of us need digital college textbooks.

One more thing: What's with the DX coming out two and a half months after the Kindle 2? That kind of short-release period never makes tech buyers happy. Heck, iPhone 1st-gen purchasers were miffed at the iPhone 3G when that came out, and that had a year between releases. Okay, you might say that the quick turn-around on the new DX was warranted because you wanted something with a bigger screen-size for a specific, target audience. But that's telling everyone who bought the Kindle 2 that they chose wrong, or that they don't need a bigger screen.

By staggering the release, you've just managed to tick off a bunch of people who bought the Kindle 2 because it was, as you claimed, so much better — then back-stabbed them by releasing an even better product two months later!

But, even if people DID wait, what choice does the buyer have? To purchase a large-screened Kindle which excels at textbooks but makes novels look silly (what's the last novel you've read that is 8-1/2x11" in size?) or buy a smaller-screen Kindle 2 which makes books look like ... well ... books, but is not conducive to textbooks and magazine trim sizes?

So, there you have my handful of column-inches, Mr. Bezos. I know they weren't like all of the other, glowing tributes you've been getting, as of late. I'll end my letter, here, as I know you're a busy man who has to run off and do lots of PR work to prevent the Kindle DX from becoming the huge flop that I think it will be.

P.S. If you think I'd be proven 100% incorrect in my assumptions by having some hands-on time with the device: Save your postage. I can't be bought.

Jeff Somogyi is the dealnews Media Editor. His opinions don't necessarily reflect those of dealnews.com.

VIEW ALL
Blog · Buying Guides · 1 min ago
The 8 Best Things to Buy in December (Including After Christmas Deals!)
Even with a longer sales season, Black Friday is still the biggest shopping occasion of the year for many. But the deals don't end after that day or Cyber Monday. Check out the best buys of December, as well as the items to wait on.
Blog · Morning Jolt · 11 hrs ago
5 Cyber Monday Deals You Need to Know: Save on Samsung TVs at Amazon
It's Cyber Monday, Black Friday's cousin that was named by Uncle Discount after watching The Matrix eight times in a row. But it brings discounts – for example, on a large selection of Samsung QLED and OLED TVs at Amazon. Check out this offer and more in our roundup of the five best deals we found over the last 24 hours.
Blog · Consumer News · 6 days ago
Black Friday vs. Cyber Monday: 8 Ways the Shopping Holidays Differ
Last year, U.S. consumers spent more money online on Cyber Monday than they did on Black Friday. But are Cyber Monday deals as good as Black Friday offers? Check out our guide to learn how these two shopping holidays differ.

It's $20 off and the best price we found. Buy Now at Walmart

Save a total of $100 with coupon code "BIGCYBERDEALS". Buy Now at Lenovo