Part database and part wiki, DealBase is one of the newest sites geared towards frugal travelers. Launched in November of 2008, the site works as an aggregator, collecting hotel deals in its massive online catalog. Unlike most travel sites, DealBase doesn't book the hotels for you, but instead presents them to you so you can make your own comparisons. Currently, the site has a total of over 25,000 deals. We gave DealBase an informal test drive to see what, if any, bargains you can expect to find at this site. 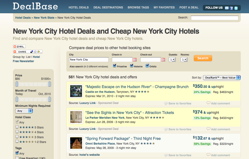 What we like: DealBase focuses solely on hotel deals and promotions. The site is clutter-free and easy to navigate with top destinations, most recent deals, and a search menu easily accessible from the homepage. The site allows hotels to advertise for free, so it claims its deals are not influenced by hotel marketing. As a result, you're purportedly getting true hotel deals as opposed to what other sites want you to book. However, what really sets DealBase apart from its competition is its Deal Analyzer feature. After looking up hotel deals, the Deal Analyzer deconstructs a deal, showing you how much of the cost is from taxes, the room itself, any "freebies" that are included ... kind of like a hotel bill. It then compares the "deal price" to that hotel's regular price. (The regular price is an average rate over the next 30 days from Hotels.com.)

In addition to the average price, DealBase automatically compares its deals to those of other hotel booking sites, including Priceline.com, Hotwire.com, and Orbitz.com. When we compared it to Hotels.com and Travelocity, DealBase found the lowest price four out of five times for destinations in New York City, San Francisco, Las Vegas, and Washington, D.C. The savings were modest (usually about $10), but lower nonetheless. In a few occasions, DealBase's prices were tied with those we found on Hotels.com, but never surpassed the prices we found on other sites.

Should you come across a deal that's better, DealBase gives you the option to submit that deal directly to DealBase's Wiki page. Each submitted deal is then verified by an editor before it's posted. (You can find DealBase's posting guidelines here.)

What we dislike: Although it typically found lower prices than its competition, DealBase won't always offer the best deals when coupons are available. For example, DealBase wasn't able to top this $75 off coupon from Orbitz we listed on dealnews last month. In addition, international travelers will be disappointed to learn that the site mainly focuses on hotel deals for North America and the Caribbean. (They do expect to expand their reach at a later date.)

Final verdict: DealBase is a good starting point for comparing hotel deals. Unfortunately, we found it too easy to beat its prices, particularly when using outside coupons. As a result, we wouldn't recommend purchasing deals found on the site without scanning for coupons or other discounts elsewhere.

That's the best price we could find by $35. Buy Now at Amazon

It's $8 less than you'd spend to get this shipped from Best Buy. Buy Now at Amazon