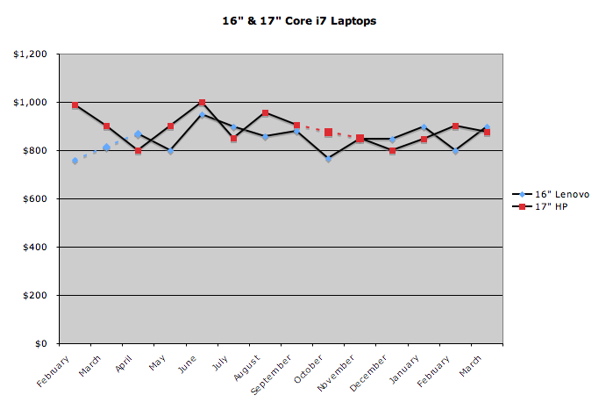 When can bigger turn out to be cheaper? When it comes to laptops, usually the bigger the screen, the bigger the price. But when we checked out pricing trends on laptops with Core i7 processors, Intel's top-of-the-line laptop CPU, we found that 17" models were sometimes going for less.

We also found that the price for any of these laptops rarely dips below $800. So power users looking for desktop replacements and gaming notebooks take note: This is the processor you want under your laptop's hood, so if you see a deal in that price range, grab it.

The chart above shows the best deals we have tracked for 16" and 17" laptops using the first generation Core i7 mobile processor. Based on the frequency of deals we saw throughout the year, we chose Lenovo and HP to represent 16" and 17" Core i7 laptops, respectively. (Deals from other manufacturers were too infrequent to include in our chart.)

In addition to a Core i7 CPU, each of the laptops we tracked came equipped with at least 4GB of RAM. Per our chart above, deals on these laptops generally remained between $800 to $1,000. Surprisingly, we found five instances where a 17" Core i7 laptop was more affordable than a 16" Core i7 laptop. Below are some price points worth noting:

Back in January of 2011, Intel announced the 2nd generation of Core i7 mobile processors, codenamed Sandy Bridge. The first Sandy Bridge-based laptop deal we posted (not shown in chart) came in at $900. As more Sandy Bridge laptops enter the market, we can expect to see further deals on 1st generation Core i7-based laptops. That said, our best buying advice is this: when you see a Core i7 laptop under $800, and it suits your needs, buy it because you're getting the best deal possible. And with some 17" laptops coming in at less than their 16" counterparts, we recommend getting the most for your buck and going with the larger 17" model.

To keep track of core i7 prices, bookmark this search on core i7 or set up a dealnews alert and we'll contact you when there are new deals.

An avid gadget lover, Louis Ramirez has covered technology for Gizmodo, CNET, Laptop, and various other publications. Follow him on Twitter — @LouisRamirez. You can also sign up for an email alert for all dealnews features.

*This data is based on deals listed on dealnews.com, which represent low points, not averages. Shipping prices (where applicable) were factored into the pricing in our data. Points on the graph represented by a "-" indicate there were no deals for that month.

We're giving away one iPad 2 per day, and today is day three. If you didn't enter on Monday or Tuesday, we're not sure if you're mentally sane. Just kidding! But redeem yourself and ENTER HERE to enter.