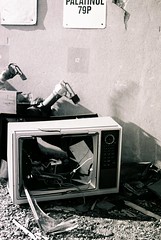 For many, many years, the mainstay of the Consumer Electronics Association has been television — the TVs themselves and the gadgets to go with them to make them easier to use and more useful in the home. With the release of its yearly report on the "5 Technology Trends to Watch," the leading industry group for the makers of electronic devices is taking a new direction. Its core areas of interest are now mostly about mobile technologies and the gizmos that make them work better, and no longer about TVs.

"Right now, TV is, in a way, kind of played out," says Sean Murphy, a senior account manager with the CEA. Penetration rates have peaked and buying is slow. His only prognosis on TV sales is that the push for 3D TVs will drive down prices overall for HDTVs and entice people to buy. "It's going to be a price war to see who can unload inventory," he says.

So if it's not about TV anymore, where is the action going to be from gadget-makers to get your dollars? The five trends to watch break down like this:

That's at least a buck less than other retailers charge. Buy Now at Amazon