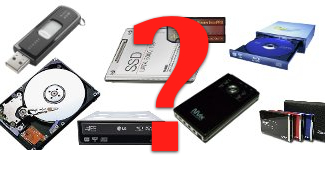 As the amount of digital content we consume increases and we compile an ever-growing collection of family photos and home movies, the issue of needing more digital storage space grows. Not only are we consuming and storing more content, the quality of that content is improving, and that data is taking up more space.

Nowadays, nearly all of our visual media is recorded in 1080p high definition. This trend has caused a shift towards higher-capacity storage; there's evidence of a phase out of DVDs (which have a typical capacity of 4.7GB) in exchange for Blu-ray discs that can store up to 25GB of data. This shift has also resulted in a thriving data storage industry that offers a range of digital storage solutions from SD cards and flash drives to standard hard drives and SSDs.

How Much Storage Do You Need? 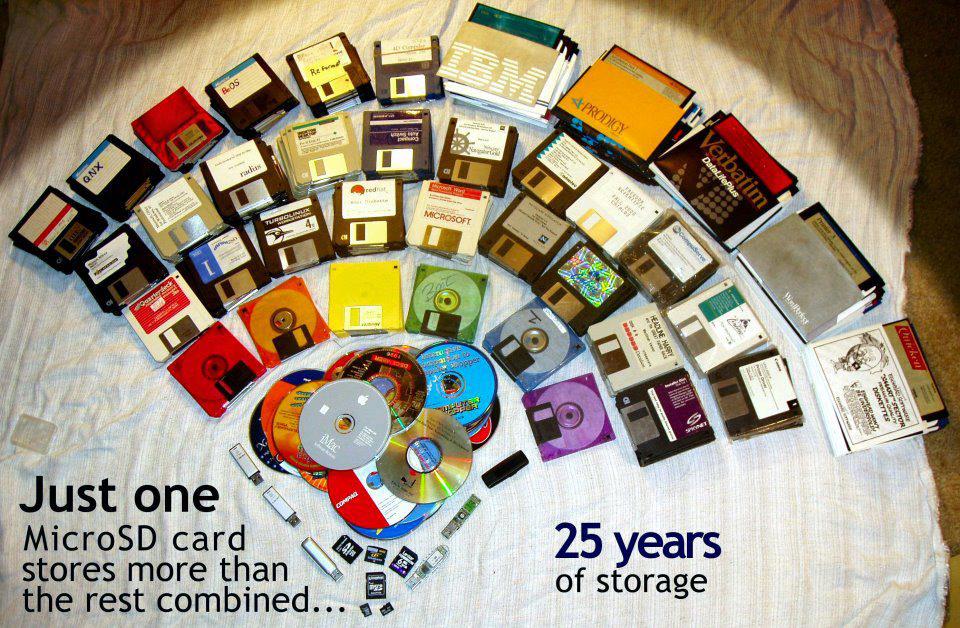 The average hard drive capacity has been doubling every two years for a long time now. Storage solutions on the market are now smaller, faster, and more efficient than ever before. And these digital storage options are also available at various price points and from a bewildering array of brands.

Luckily, most of the data we consume is fleeting and there's no need to store it permanently. But to meet specific storage needs, we'll first have to look at what it is we save to disc: it's not unusual for modern PC games to be as big as 30GB. Likewise, large movie collections can take up space to the tune of 5GB or more per HD video. And as for that iTunes library, depending on the length and quality, 10,000 songs could take up anywhere from 40GB to 100GB.

More than building a versatile media library, it's also worth considering the importance of backing up important digital files. A single hard drive failure could threaten to wipe out photos of precious memories, that book you've been working on for years, and more.

How Important Is a Manufacturer or Brand Name?

There's a lot of variety when it comes to SD cards, external hard drives, flash drives, etc. And some of these storage device brands can seem more high-end than others. But when it comes down to it, does a brand name storage solution even matter? Are there benefits to spending more for, say, Western Digital over Seagate, or SanDisk over Patriot or Lexar?

We turned to expert Jerry Jackson, Managing Editor of the Technology Guide websites to learn about whether lesser known storage brands are worth considering. Jackson believes that "there are huge cost-savings to be had by going with off-brand SD cards or USB drives." However, the buyer should beware. "The flip side is that speed and reliability simply aren't up to the same standard [as better known brands]," he says. "It's not just the name brand that you're paying for ... but actually the quality, speed, and reliability of the flash memory itself and the controllers."

Jackson also says that anecdotal evidence suggests cheaper SD cards and flash memory tend to result in an occasional corrupt image and a generally higher error rate. If you merely want to transfer or transport files that are already reliably backed up though, then portable, budget storage cards and flash drives will do the trick. Luckily, we see regular deals on USB flash drives, particularly of the 8GB, 16GB, and 32GB varieties, as well as a range of 16GB+ SD cards.

What About SSDs and HDDs?

While the price of SSDs continue to steadily drop, they still remain at a comparative premium. For example, you could snag a 3TB standard hard drive deal at a price that comes to about $0.05/GB, whereas SSD deals of all sizes could cost $0.50/GB or more. Still, if the SSD option interests you, Storage Review recently did a roundup of the top 10 SSD brands that matter, which includes Kingston, Patriot, SanDisk, and more; all are brands that we frequently list within our storage deals section.

HDDs are a completely different story; there are an abundance of high-capacity options on the market — some priced very low. Jean-Jacques Maleval, Editor of Storage Newsletter, told us that Western Digital, Seagate, and Toshiba are the names to trust for HDDs; it's a simple case of choosing between these three based on price. And as it turns out, this trio are the only ones left still making HDDs, as the market has consolidated over the years and other companies have stopped HDD manufacturing or have been acquired.

SSDs Are the Future, But Hybrid Systems Are Cost-Effective

HDDs have grown more reliable over the years, but they rely on a physically rotating magnetic recording disk platter; because of this, they eventually always fail. Since an SSD has no moving parts (which also generate heat), it is more likely to last, at least in theory.

And when it comes to performance, SSDs offer a real boost over HDDs. According to Jackson, with an SSD, "start-up speed is much more rapid; you've got quicker resume from sleep, and quicker application launch. It can make a computer with a weak processor feel like a speed demon."

The trade-off is that SSDs are more expensive, as we mentioned above, and generally have smaller storage capacities. A great solution for traditional desktop PCs is to have two drives – an SSD as your main boot drive, and a traditional hard drive for the bulk of your file storage. (In fact, we saw just such a deal last week, in which a 750GB hard drive featured an 8GB SSD and came to just $0.15/GB, a happy medium between the two per-gig price points.) This mix of an SSD and a standard hard drive is the best combination for a balance of performance and budget. But this setup is less likely to be an option for notebooks and ultrabooks unless they support the newer mSATA SSDs, which plug into a different slot to create a similar hybrid system.

Which Storage Solution Is Right?

Different storage solutions are appropriate for different situations and devices. For further information you can find a special report on storage at Desktop Review. It is always best to start out by estimating the amount of storage you need, then factor in your device preference, and budget. Buy a brand name you trust and aim for the highest capacity storage solution you can afford.

Brian Moon (DealNews)
Their failure is not as big of a deal as their slow degradation. Spindle hard drives pretty much either work or they don't. Maybe they get some bad sectors. But these days, once that starts to happen, the disk is useless. Once on sector goes, others follow. SSD on the other hand can slow over time without failing. But, they may not fail for a long time after they start to slow down.

That said, they are still very reliable. The modern ones last as long as spindled drives in my uses. In the case of laptops, longer due to the moving parts having issues with being in a portable case.

FWIW, we are slowly migrating our servers to SSD for speed and reliability reasons. Those are enterprise level SSD drives that are quite a bit more expensive than the consumer grade ones though.

jcauthorn
Please be aware that SSD drives *WILL* also fail - they have a limited lifespan due to the fact that each time the data gets written, it physically weakens the semi-conductor layer that holds the data bit. Over time, that will stop working. For more info google: "The SSD failure debate" on ZDNet or listen/read drive expert Steve Gibson's (Gibson Research Corporation, home of SpinRite) security now podcast that talks about the issues.
October 12, 2012

Apply coupon code "ATOTONTF6" for a savings of $10. Buy Now at Amazon