To celebrate the upcoming Captain America movie, we've collected some of the best (and weirdest) items featuring the shield-wielding superhero.
BY:
MATT DRACULA
DealNews Contributing Writer

Captain America: Civil War debuts on May 6, and if early reviews can be believed, it's another home run for the Marvel Cinematic Universe. Needless to say, you can already find tons of products based on the film, from toys and books to games and junk food.

The modern Marvel movies have truly been a blessed thing for Captain America goodies. Despite the character's long status as one of Marvel's top names, he never seemed to be quite as "merchandised" as Spider-Man or the Hulk. My, how things have changed!

Of course, the well was never completely dry, as this list proves. We've pored over eBay to find 10 of the best — and strangest — Captain America collectibles ever made. While you wait for the movie's debut, let this romp through Captain America's retail history get you even more amped up, if that's possible! 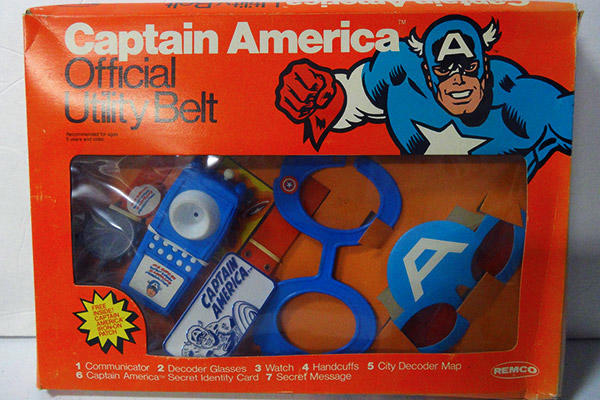 Batman wasn't the only superhero with a gadget-stuffed utility belt! This vintage playset from Remco included everything a kid might need to fight crime the Captain America way, such as baby blue handcuffs, a nonfunctional watch, and a secret identity card. Hey, what fun is being a superhero if you don't get a bunch of oddball paraphernalia? 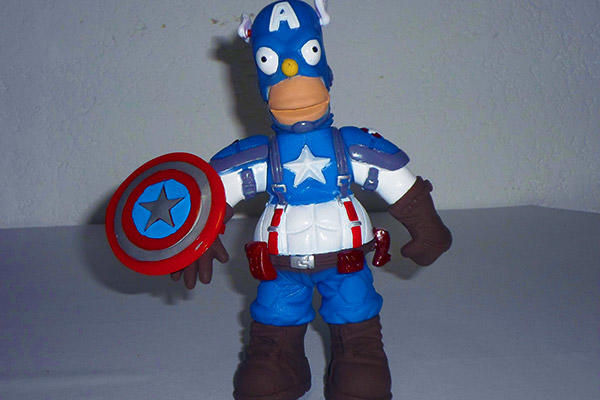 Though it looks like a one-off custom job, there's actually a sprawling line of these crude (and decidedly unlicensed) Homer Simpson "hybrid" figures. Made in Mexico, the collection mixes Homer with all sorts of pop culture icons, from Darth Vader to Buzz Lightyear.

They're intentionally absurd, but for what it's worth, Homer blends with Captain America pretty darn well. Three cheers for paunchy patriots! 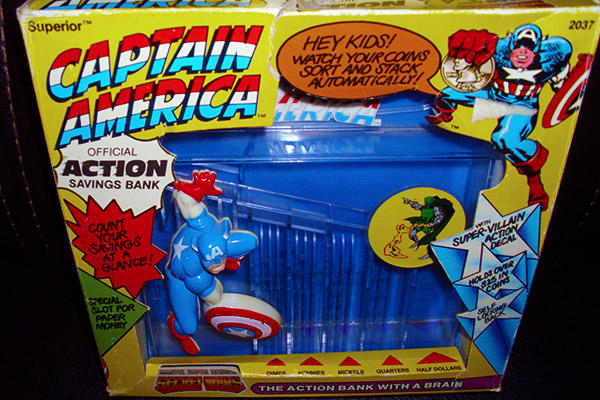 Promoted as "the action bank with a brain," here we have Captain America protecting our meager savings — and presumably wondering how he got assigned to such a low-rent gig.

It's the same sort of plastic bank that every kid had at least once, though this one is much improved with the addition of a plastic Captain America, who fearlessly halts any villainous conspiracies to swipe our dimes and pennies. Thanks, Cap! 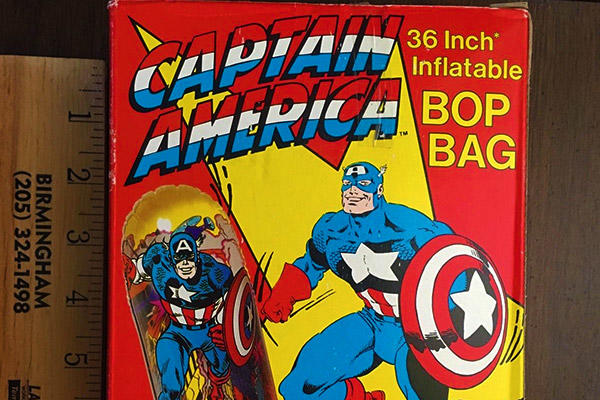 "Bop bags" are basically pool toys for dry land, made with weighted bottoms that keep them upright no matter how hard you hit them. They're punching bags for tiny people with tiny muscles.

It may have made more sense to elect one of Captain America's enemies as the featured character, because as things stand now, all you can really do is punch Captain America in the face. Perfect if you're a big fan of Baron Zemo, but a little strange for the rest of us! 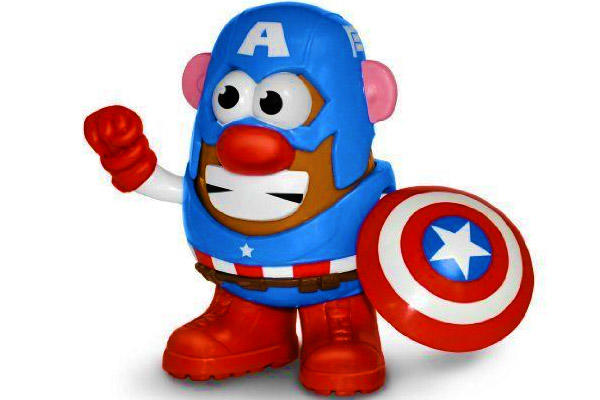 Hey, if every other pop culture icon can fetch a Mr. Potato Head spinoff, why not Captain America? Something tells me that Joe Simon and Jack Kirby never would've predicted this particular "evolution" back in the '40s. 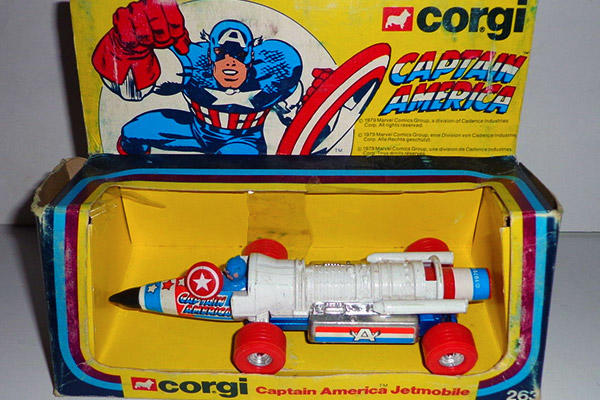 Something tells me that Captain America never rode such a thing in the comics. Just a guess.

Corgi's die-cast "Jetmobile" places Cap in the driver's seat of what I assume acts as both a car and a space shuttle, depending on the needs of the situation. Of course, it looks more like Cap has found himself trapped inside some giant space alien's roller skate. 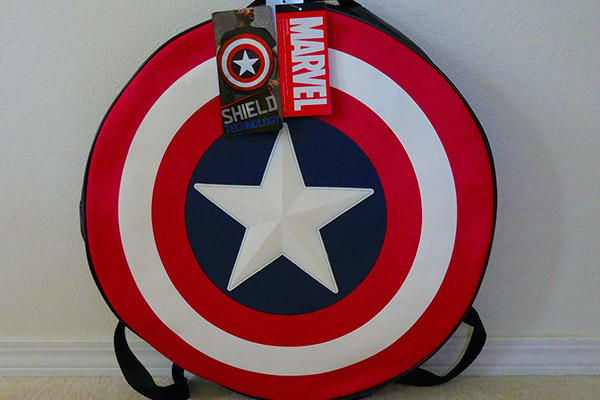 This is one of the few "modern" items on this list, and easily the most sensible. If I were still in elementary school, this would be a must-own. A backpack made to look like Captain America's famous shield? That's great! The real shock is that it took so many decades for someone to finally make one.

(This is also a can't-miss item for convention cosplayers who are willing to trade a little finesse for a cool place to stuff their swag.) 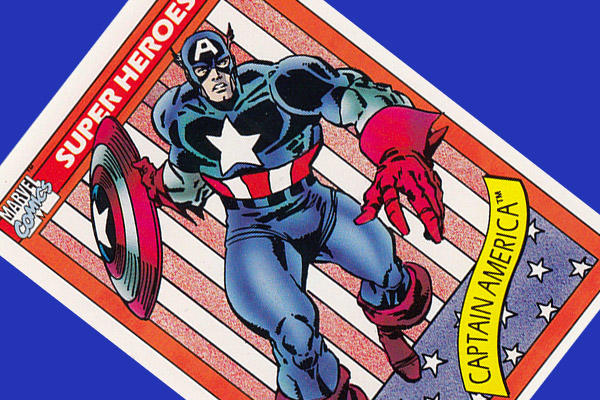 Remember the comic book boom of the early '90s? I'll always believe that the first series of Marvel Universe trading cards had plenty to do with it. Those cards were collected by tons of kids who'd previously shown little interest in comic books, essentially acting as cardboard gateway drugs.

Captain America had the honor of gracing the very first card in the series! 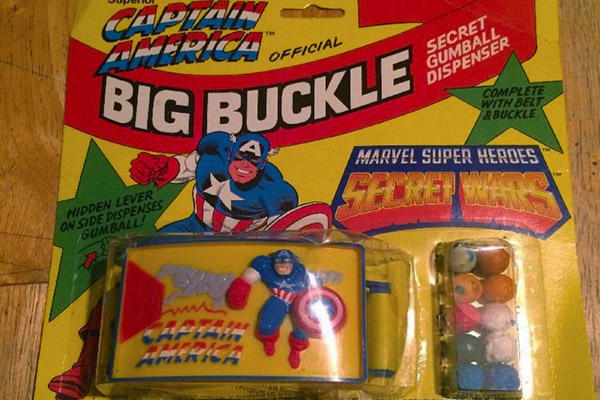 How convenient! A belt buckle that dispenses gumballs! Look closely and you'll notice the handful of super expired gumballs that came packaged with the dispenser. If you decide to bid on this, you'll want to avoid eating those. They'll break your teeth faster than a Captain America uppercut. 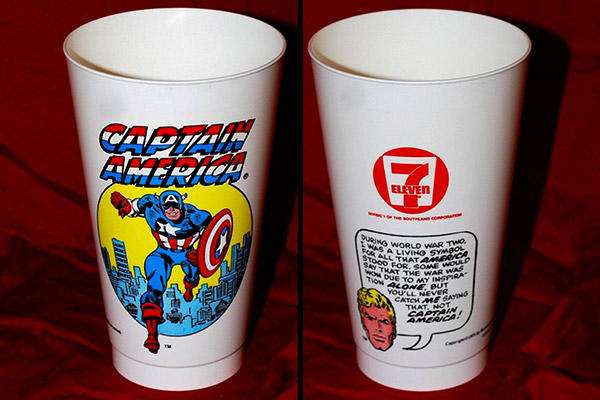 Back in 1975, 7-Eleven famously offered no less than 60 different Marvel-themed Slurpee cups, and with that many cups, it had to use some pretty obscure characters. (Odin, Triton, and Clea are familiar enough to Marvel fans, but even by 1975 standards, it was pretty remarkable to see them at 7-Eleven!)

Naturally, Marvel also drew from its most popular characters, Captain America included. No one cup costs very much on eBay, but if you're thinking about collecting all 60, boy, you have way more money than I do.