Back-to-School Laptops: What's the Best Deal You Can Get?

August marks the start of back-to-school season, and with it come dozens of sales. But when it comes to laptops — one of the most coveted back-to-school items — what sort of deals can you expect this month?

To find out, we did a little research. Below, we broke up the potential buying options into mainstream, high-end, and budget categories, and when applicable, we looked at the dealnews archives from last summer to find out when prices were at their lowest and compared them to prices we've already seen this year. With our help, you'll know what to look for when shopping for the perfect laptop for your student.

For a safe, all-around option, a laptop with a 15" display and at least 4GB of RAM, a 500GB hard drive, and a Core i5 processor will serve your student well. Such a system provides ample processing power for everything from basic word processing to HD video streaming (for when your student is done with classes, of course). So when's the best time buy in this category? 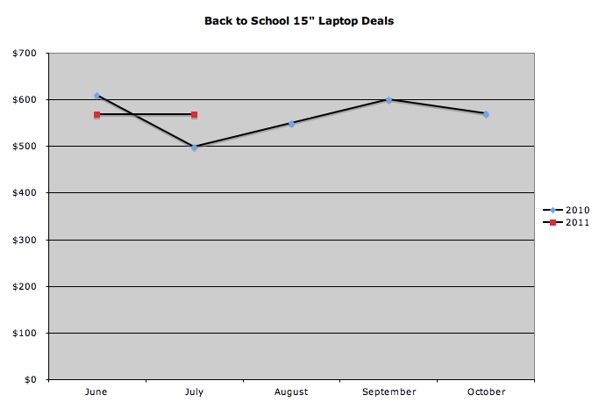 Last summer, July proved to be the best month to buy a laptop with the above-mentioned configuration. August was the second best month with the best deal coming in at $550. For the month of September (which is still a factor in plenty of back-to-school sales), the best laptop deal jumped by $50.

So far this summer, deals on 15" laptops have plateaued at $569. While that may be higher than last summer's best deal, it's important to note that it buys you more technical prowess than last year's model. In particular, this year's $569 laptop includes a faster Sandy Bridge–based Core i5 CPU, a noticeable improvement over last year's first-generation Core i5.

If you don't care to have the latest Intel Sandy Bridge processor, the best deals on 15" laptops with last year's Core i5 CPU (not shown in graph) have come in at $509 and $450 for the months of June and July, respectively. So for the greatest savings, you'll want to look at systems with the first-generation Core i5. (Check the processor model; if it has three digits after i5, like Core i5-520UM, then it's a first generation.)

Now that we've looked at mainstream laptops, it's time to focus on their counterparts — high-end 17" systems. Spec-wise, we narrowed our 2010 search down to a 17" desktop replacement with at least 4GB of RAM, a 500GB hard drive, and a Core i7 processor. The Core i7 is Intel's top-of-the-line flagship CPU. More powerful than the mainstream Core i5, it can be found inside many of today's desktop replacements. 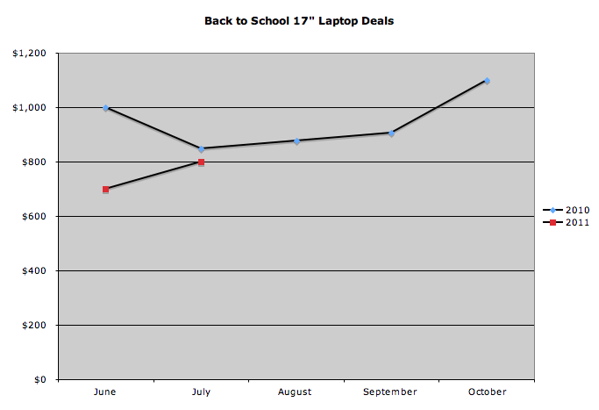 From the months of June 2010 through October 2010, July saw the best deal on desktop replacements with a price of $850. August had the second-best deal at $879, whereas prices in September jumped up to $905.

This summer, the best deals on comparable desktop replacements have come in at $700 and $800 for June and July, respectively — a price drop of at least $50 from last summer's best price. And like this year's 15" systems, this year's 17" notebooks that fit this range come with an upgrade: Most are packing new Sandy Bridge CPUs, 6GB of RAM (instead of 4GB), 750GB hard drives (in place of 500GB), and built-in Blu-ray disc drives. The Blu-ray drives are a major add-on, as they're still uncommon in most laptops. So for 2011, the entire system has received a huge spec bump (compared to 2010's system) without jumping significantly in price. If it's bang for your buck you're after, this is the category you'll want to keep an eye on.

With its vast market dominance, one might think that Intel has won the mobile processor war. However, 2011 saw the introduction of various new AMD Fusion chips, many of which are aggressively discounted and thus ideal budget options for a student. 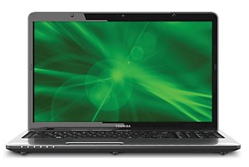 One APU (accelerated processing unit) to keep an eye on is the AMD A6-3400M. Introduced in June of 2011, this quad-core chip runs at 1.4GHz and features built-in Radeon HD 6250 graphics. Laptops based on the A6 debuted on dealnews for $707 in late June. But they have fallen as low as $480 recently (see this expired 17" Toshiba Satellite deal, pictured right). Plus, of the eight laptop deals we've listed with this APU since its debut, four have been Editors' Choice worthy, due to the low price and value it offers.

Laptops with AMD's dual-core E-350 APU have also been popular on dealnews, and PC Mag claims it's leaps ahead of Intel's Atom CPUs. You'll find the E-350 in budget ultraportables and in netbook/laptop hybrids. A few days ago, we listed a 16" Acer laptop with this chip for $299.99 (after this $50 mail-in rebate, plus $8.96 for shipping), the least expensive laptop we've ever seen with this chip.

Likewise, the dual-core C-50 was designed by AMD for HD netbooks. Notebooks with this APU debuted on dealnews in January at $330, and we recently saw a 16" Toshiba laptop with this chip for an all-time low of $280 (since expired). The C-50 thus offers consumers a great opportunity to get a dual-core system for a great price.

Apple products are popular with college students. And while you may think they're never discounted, the truth is there are many discounts to be had on these systems — starting with the company's back-to-school sale, which takes up to $200 off for students and bundles a $100 App Store Gift Card with the purchase of a new MacBook Pro, MacBook Air, or iMac.

This summer Apple also unveiled it's new MacBook Air. Available in 11" and 13" configurations (and with deals starting at $950), the fifth-generation Air now packs a back-lit keyboard, Thunderbolt port, Mac OS X Lion, and, most importantly, a Sandy Bridge Core i5 CPU. By comparison, last summer's MacBook Air (which was the third-generation 2009 Air) debuted at $1,499 in June 2009 and we saw no deals on that system all summer.

Traditionally, Apple laptops are priced at a premium over their PC counterparts, but as we've seen, the new MacBook Air is also aggressively priced when compared to ultraportables in its size range.

With a more powerful processor, a healthy amount of upgrades, and a solid number of deals, the new MacBook Air is bound to be a hit at colleges across the country.


Ready to put this advice to good use? Set up an email alert for our laptop deals so you'll know right away when we list the best option for you and your student.