Are Plasma TVs Making a Comeback? 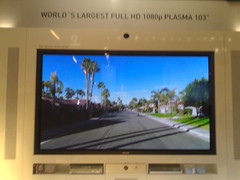 A recent press release from the Plasma Display Coalition paints a rosy picture for plasma HDTV sales in the U.S. this year. It cites data from the market tracking firm NPD that indicates plasma sales from January through April topped one million units, up from 805,000 units for the same period last year, amounting to a 25% increase. The release also points out that LCD HDTV unit sales only increased 2% over those same periods.

A Lot for Less

There are good reasons why plasma HDTVs have seen good unit sales numbers. You can talk about their excellent black levels, and the fact that the high image refresh rates make them well-suited for stereoscopic 3DTV using shutter glasses, but these factors likely take a back seat to something even more important: price.

Compare the price of equivalent plasma and LCD models and you're likely to find a strong advantage in favor of plasma. For example, the LG 42" 42LD520 LCD HDTV is available for $549 including shipping. This is an attractive price, especially for a model with 120 Hz refresh rate. On the other hand, the LG 42" 42PT350 plasma HDTV is available for $540 with free shipping. The deal also includes a $100 gift card, however, which effectively drops the price to $440. In the end, you would pay almost 25% more for the LCD model.

The fact is that consumers have been buying the lower-cost plasma models at a faster clip, which has driven the increased sales. Many of the units shipped to the North American market have been 720p resolution models in the smaller sizes, according to Paul Gagnon of DisplaySearch. In large part, these are made in older factories such as those from LG and Samsung, and are not the high-end 1080p products made by companies like Panasonic. Panasonic had plans to double its production capacity, but has slowed those growth plans. LG and Samsung have increased their plasma production, but simply by adding more shifts and running the production lines around the clock. Since the original investment in their older plants has already been paid back, they can afford to sell the products at a lower cost.

Despite this increase in unit sales, the future for plasma is dim because revenues have remained flat. In other words, the manufacturers are selling more product but not making any more money.

While plasma technology has certainly improved in recent years, it still faces many challenges in its effort to compete with LCD. LCDs are thinner and lighter in general, especially with new LED edge-lighting designs. LED backlights also provide enormous advantages in terms of lower energy consumption, reaching efficiencies that plasma cannot match at present. And LCD panel production continues to improve with higher efficiencies and lower-cost materials, producing products that rival the black level and viewing angle performance of plasma.

As a result, plans for expanding plasma production are on hold. In contrast, companies are moving ahead with major investments in new production capacity for LCD panels, especially in the larger sizes where plasma used to have an advantage.

As a result, DisplaySearch has forecast plasma HDTV shipments to start to decline slowly starting next year. Over the same period, unit shipments of LCD HDTVs are expected to grow by 8% to 11% a year. As prices continue to drop, LCDs are likely to see little or no growth in revenues in spite of the increased unit shipments, but plasma will have to deal with 10% to 15% annual declines in overall revenue.

The bottom line is that plasma has probably evolved as far as it is going to go for HDTV applications. The immediate future belongs to LCD technology, and while plasma is not likely to go away any time soon, its share of the display market worldwide will continue to shrink.

grhaigh
Ok seriously I am an avid TV market watcher and I would say that Plasma's are the very best TV's out there today, there is NO Question about that.  Sorry everyone but LED or LCD technologies cannot compete in picture quality.  Sure they are getting better, but so are Plasma's and no they are not going away because that is what Panasonic does and Samsung is also a big contributor.  Yes LED and LCD are more energy efficient, but it would probably take more than the life of the TV before it starts getting close to matching the price of the others.  And, yes the lower line of plasmas start at 720P and not 1080P but if you want a good explanation of this then go check out CNET reviews and David Katzmaier who has been reviewing TV's for a long time if you want an excellent review and help in the HDTV world.
June 28, 2011

Billbmsn
You first "comparable" LG LCD and plasma models don't appear to be.  The LCD is 1080p wile the plasma is a lowly 720p unit.

I started with plasma years ago.  LCDs at that time had horrible angle of view restrictions.  Some LCDs still do, although none are nearly as bad as the earlier ones.  Anyway, top of the line LCDs are still cheaper than "comparable" plasmas and do everything about as well, possibly excepting motion handling, and are far more energy efficient.

Niminium
Plasma run hotter, use more electricity. The savings you may have by
purchasing an inexpensive plasma tv, would be offset by the power
consumption costs. There are new emerging technologies that plasma
cannot keep up with, such as Sony's paper thin, roll up monitors and LCP
plastic technologies coming out. Yes, that's right, your car's hood can
be a tv, or monitor. (Or mostly anything plastic.) Tell a friend. ;)
June 27, 2011

AlfredPoor
Thanks for the comments and questions. Here are some quick responses:

2. Permanent burn in is less of a problem for plasma than it was, but it can still take many hours for a "persistent" after-image to go away. This is not a problem for LCDs.

3. Rear projection TV is a few more years further down the road of decline than plasmas. The Mitsubishi products can look very good, and the LaserVue model has solid state light sources that will never need replacing (you'll want to get a new TV before the lasers get to half brightness).

4. Plasma won't go away, any more than vinyl records or tube amplifiers have. But they will have a shrinking market share that will be more and more expensive to maintain. Pioneer built the best plasmas but they could not afford to stay in the business. "Good enough" can be the enemy of "better" which is both why the inexpensive low-end plasmas are selling so well for now, and that the higher-end plasma sets are going to continue to struggle.

RBrown
I would have to question the opinion of this article. Yeah, maybe eventually plasma will go away 10 years from now, but LCD is so far behind Plasma as far as picture quality and LED is even farther behind that. Plasma's do require more power consumption, but who goes into an electronic store saying I want the tv that uses the least power??? You buy a tv for the picture and until LCD and LED can compete, plasma isn't going anywhere. The top 5 tv's on the market are Panasonic and Samsung Plasma's. @paulperry, most plasma's have dealt with the burn in issue, only the lower end models might still have some affects.
June 27, 2011

paulperry
I keep waiting, they are getting closer...when I find a 55 inch for $500 I'll buy it even if it is 720p. Do Plasma's still have the burn in issue?  I've heard different stories.
What's the deal with the Mitsubishi rear projection TV's, per square inch, they have to be the cheapest 1080p out there.I know they are big, bulb(s) need replacing sooner...are they going away soon?
June 27, 2011