Are Microsoft's Hologram Glasses Cool or Not? 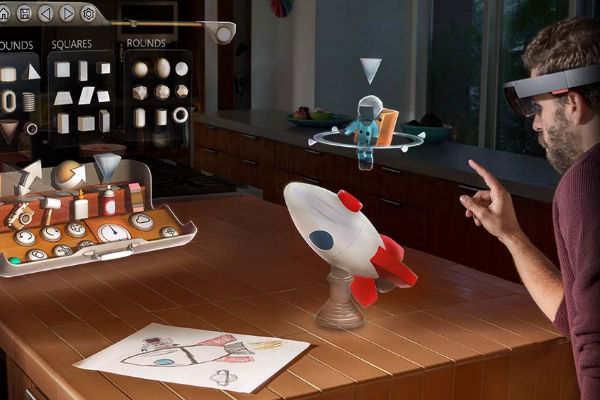 On Wednesday, Microsoft announced that it will dive into the virtually untapped world of holographic computing with their upcoming HoloLens. But before you go imagining Star Trek-like holodecks, where Data dresses like Sherlock Holmes to solve crime, allow us to adjust your expectations a bit. A lot more like Virtual Reality than a true hologram, it requires the user to wear a headset to see 3D "holograms" that can interact with the environment around them.

To over-simplify it (in a way that would probably make the Microsoft engineers weep), HoloLens is essentially an Xbox Kinect glued to two Google Glasses, then fit into a pair of giant sunglasses (like the kind grandma wears after she's been to the eye doctor's). The two Google Glass-like projectors display a stereoscopic image onto the sunglass lenses, tricking the users eyes into seeing 3D images. The Kinect-like bit gives the headset spatial recognition, the images that the user sees can interact with the environment.

In this way, the images that HoloLens "projects" don't have to be floating in space, but can be "attached" to a point in real space. Imagine, HoloLens can hang a virtual calendar on your real wall! Or a 3D model you're working on can look as if it's sitting on your desk at work! Of course, no one else will see these things, so an outside observer will see you reaching out and waving your hands in the empty air. Were it not for the clunky glasses that allow all this to happen, those around you might think you've gone off your rocker as you reach out to spin a virtual globe, or pinch a virtual map. 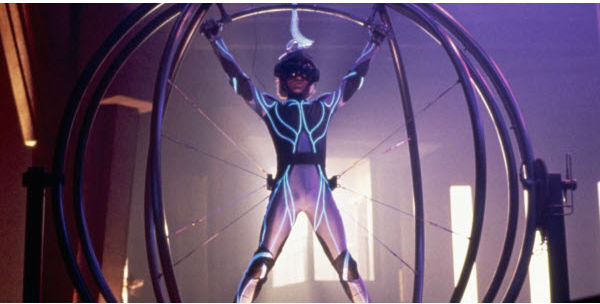 Rebranding as a "holographic" system and avoiding any mention of "VR" was a very clever move on Microsoft's part as "virtual reality" immediately calls to mind terrible 90s films about Lawnmower Men and brings with it a certain hilariously awful stank of failure. "Holograms" sound way more exciting and current.

What Counts as a Hologram Anyway?

However, coolness aside, using that term immediately sidetracked our office discussion and we began debating what a "hologram" even is! Some of us argue that a hologram shouldn't require glasses to be seen. Think of Star Wars: Did Darth Vader need to wear special glasses to see Emperor Palaptine? No — though now that we think about it, Vader was kinda wearing special equipment. Anyway!

Others around here tried to argue, "Who cares, it's still pretty cool."

What do you say, reader? Are these holograms? Even if they're not, is it still cool? Let us know in the comments below!

The_Cam_Man_123
I don't think these are holograms. I think they're visual/digital projections tricking your brain into thinking they're there. I believe a hologram is a 3-dimensional image that you can view freely without any special equipment to wear on you. But, I still think they are awesome!
January 26, 2015

The_Cam_Man_123
I don't think these are holograms. I think they're visual/digital projections tricking your brain into thinking they're there. I believe a hologram is a 3-dimensional image that you can view freely without any special equipment to wear on you. But, I still think they are awesome.
January 26, 2015

As you put it:

You saw a prototype, not a commercial product on both counts. The O.R. has raised a metric ton of money, had two dev kits solely funded by idiot fans, was acquired by one of the biggest companies in the world and it STILL isn't one day closer to being released.

It's stuck in concept limbo, just like Sony's Version, just like Microsoft's version. If you think that even a fraction of the things shown at CES ever get put into full on production then it is YOU that are showing their ignorance. I mean just off the top of my head how about Microsoft's interactive multi-touch table, or for that matter ANY of the companies augmented reality concepts thought up over the last 15 years? Yup... never released.

I mean seriously man, saying a product is relevant and on the way just because it's showcased at CES is like saying the concept car you saw at the auto show will get released... odds are it won't.

dealnews-bglaser (DealNews)
@triplediomonds Sometimes, our writers offer their thoughts on the value of a major new product or service, or we solicit your thoughts. And we are critical or supportive of any company when we see fit- including Apple, like when we said that the iPad mini 3 was not a worthwhile upgrade (http://bit.ly/1GHy6R4).
January 23, 2015

vanfanel1car
@HowardaC Umm...yeah, oculus rift talk is even bigger now than it was a year ago. At this year's CES alone it was the biggest whisper on the show floor "Did you check out the crescent bay prototype in oculus booth?..." Sony will say something when there's something further to say. To say that VR is junk and isn't being discussed shows your ignorance.
January 23, 2015

HowardaC
It's junk. VR tech is always a dead end. Remember just excited people were about the Oculus Rift just a year or so ago? Do you hear anyone talking about it now? What about Sony's version?

Yeah it's because to fool the eye you'd need a quad resolution display or higher AND motion tracking AND augmented reality. All of it has to work flawlessly as well. That equates to a device that is super expensive.
January 23, 2015

l1onheart
Quote Rebranding as a "holographic" system and avoiding any mention of "VR" was a very clever move on Microsoft's part as "virtual reality" immediately calls to mind terrible 90s films about Lawnmower Men and brings with it a certain hilariously awful stank of failure. "Holograms" sound way more exciting and current. Quote

This writer simply don't know anything. VR? do you know what the hell is VR? VR stand for virtual reality and Microsoft Hololens isn't VR but it is an AR. What is AR? AR stand for Augmented Reality. VR and AR has some similar but they are different.
January 22, 2015

Terry1
I think its a good idea, But 1st gen will probably be very rough. Projecting on the inside of the glasses sounds like a good lower price point choice (cheaper then those high def phone screens), but will it produce 1080 or 4K to give a more real look, instead of a fuzzy overlay or color saturated overlay of the world. I would like to see how they deal with lag. I hope this does not mean Microsoft is not making VR headset for Xbox....

If they put Cortana on Xbox one to interact with headset, I'm sold!!!

I can imagine all the accessories this tech will open the market too and all the 3D printer things you can make to interact with augmented reality!

FYI: a Hologram that needs to be seen through glasses is called augmented reality. If you can only see an image in the glasses and no reality then it's Virtual reality, and if you don't need glasses to see augmented reality, that's called Hologram (my opinion).
January 22, 2015

ninny1176
I think it's remarkable how it interacts with the environment in the field of view. What I think is one of neatest features is that it doesn't project an image on a screen, instead projects images onto your retina in the same manner normal light does...this allows the device to provide images that are almost seamless to the real world.
January 22, 2015

JABrwoky13
I'm not saying this won't be cool, but if you look up the definition of a hologram, I would say this classifies as virtual reality. Looking forward to trying it out.
January 22, 2015

nimer
@Heyitsrick, I am on my fourth iPhone, and use many of Google products and services, but 100% agree with you. People find joy in mocking Microsoft, unfairly.

God knows MS did their share of mistakes, but I have to say since 2013 they have been doing all the right things.

Let people laugh all they want, Microsoft remains a BEAST and their corporate world ($$$$) footprint is bigger than all other competitors combined. Microsoft is also doing great things with enterprise service cloud service, competing with Oracle and even SalesForce.
January 22, 2015

Heyitsrick
Let's be honest: If this were Apple or Google, this would be touted as the greatest invention ever. But since it's Microsoft, the discussion needs to be "is this cool?" Lame.
January 22, 2015

nimer
This is the future! Microsoft gave us a peak into our future: A PC with voice assistant that's 'always on', an 84 inch tablet (now for corporate, but soon we'll see smaller versions at home), and last but not least augemented reality glasses.

Material of Science Fiction is now a reality!
January 22, 2015

Cilvre
this is augmented reality more than holographic technology.
January 22, 2015

VIEW ALL
Blog · Morning Jolt · 18 hrs ago
5 Deals You Need to Know Today: Under Armor Outlet Discounts
There's up to 40% off at Under Armor for all plus extra savings for those who spend $100 or more. Check out this offer and more in our roundup of the five best deals we found over the last 24 hours.
Blog · Buying Guides · 1 day ago
What to Expect From Father's Day Sales in 2022
Father's Day is around the corner, and sales will be in full swing before you know it! Check out our guide on what to expect from Father's Day sales in 2022, including what will be discounted and the savings we should see.
Blog · Marketplace · 2 days ago
How to Create Coupons on Amazon
Amazon brought coupons to Seller Central in 2017, but these aren't your grandmother's coupons. Learn how to create coupons on Amazon, and what to know before you do.
Blog · Buying Guides · 3 days ago
6 Simple Ways to Renovate Your Kitchen Through Home Depot
If you're feeling like your house needs a refresh, consider these simple ways to do a Home Depot kitchen renovation. You can update your look and potentially increase your home's value!
Blog · Buying Guides · 6 days ago
What's the Best Time to Buy Big-Ticket Items?
Savvy shoppers are always on the lookout for a great deal, and to help you out, we've put together guides on the best times to buy big-ticket items.