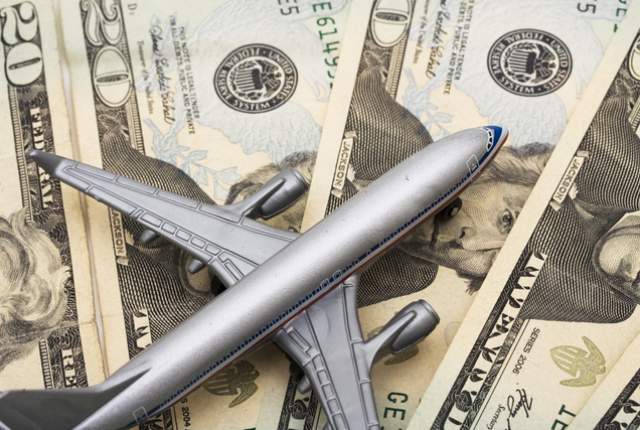 The nation's four largest airlines — American, United, Delta, and Southwest — are being investigated by the U.S. Department of Justice amid concerns that they allegedly colluded to keep fare prices high. Combined, the four carriers control more than 80% of the domestic seats on planes.

At the center of the probe is whether the nation's major airlines coordinated on whether or not to expand various flight capacities. By making sure flights are full — and competition for passengers on various routes is low — airlines are able to keep profits high. The investigation began as a result of public comments made by airline executives at a trade conference in Miami.

The investigation comes just as the airline industry announced record profits of $19.7 billion in the past two years combined. Analysts predict this year could bring even bigger profits for the industry thanks to a drop in the price of jet fuel and a steep rise in the number of ticket and baggage fees.

However, federal investigators have a tough job ahead. To prove collusion, investigators must comb through thousands of emails, letters, and phone calls that could be used to prove that the airlines communicated with each other about how much seating capacity to add. Absent from the probe are smaller airlines like JetBlue and Alaska Airlines.

What do you think? Would you fly with smaller carriers if the big airlines are found guilty? Let us know in the comments below.

thebs
Nearly all of my direct routes I previously flew on AirTran out of MCO (Orlando Int'l) at least doubled, sometimes tripled, after Southwest acquired them. Southwest doubled their MCO footprint and, with limited or no direct routes by other carriers to so many former AirTran destinations (although Southwest removed some too), they didn't have any competition. I've been flying Delta since, who keeps jacking up rates, and is almost double what AirTran used to be when fuel prices were much higher -- and that's with 1 stop!
July 12, 2015

peterthedj.com
Interesting article. Ironic that the DOJ is investigating price collusion among the 4 major airlines, after the DOJ was key in approving various mergers that allowed it to get down to just 4 major airlines in the first place.
To answer the author's question, "Would you fly with smaller carriers if the big airlines are found guilty?" Unfortunately in a mid/small market like Syracuse, we don't have much of a choice. There are several airlines serving SYR airport, but not every airline serves every destination. A few of the so-called "discount fare" airlines only serve one or two "key" destinations from here, usually with no connections available.
July 11, 2015

nimer
JetBlue and Southwest are almost as expensive as the rest.

My new jam are ultra-discount airlines such as Spirit and Frontier. Those airlines are unapologetically cheap, but they charge you for everything (carry on, drink, snack, better seat), but totally worth it for shorter trips.

Yellowshock
I think the comment that the fees of the non-implicated airlines are just as high is in a way not saying anything. Fare prices are set by airlines actively monitoring prices of competitirs as well. So if you have few large bad apples setting the pricing levels then the little ones, theoreically, would be craz to far under these pricing levels. They lack the scale of the bigger ones and cant go as low anyways given their cost base and reach.

With what we have seen around LIBOR rates fixing scandals, FX scandals etc it is just a matter of time that we realize that the uberwealthy behind these companies are collectively filling pockets everywhere because they basically "pay" for our government.

It's in my mind just a matter of time before the evident insurance companies etc are also going get exposed.
I dont mind paying taxes and paying my dues to ehlp our country. But the people behind big industries are feasting. Call me a tinfoil hatter.
Lastly: i'd go for the little guys.
July 10, 2015

thompstone
Interesting.
I often fly JetBlue or Southwest just for the convenience of a direct flight to an airport that's within an hour's drive of my ultimate destination. But I don't find that the pricing is much different than the other major carriers. Sometimes it's even cheaper to fly Delta, but I prefer the non-stop option that they don't typically offer. And I actually thought the pricing wasn't too bad, though maybe I'm just used to it.
July 8, 2015

VIEW ALL
Blog · Buying Guides · 1 hr ago
59 LGBTQ-Owned Businesses You Can Support This Year
June is Pride Month, so if you're looking for a spate of LGBTQ-owned businesses to support with your wallet, we've got you covered! Check out our guide for 59 shops to check out now, as well as tips on how to find more.
Blog · Morning Jolt · 10 hrs ago
5 Deals You Need to Know Today: Under(priced) Armor at Amazon
Finally, a good excuse to use the word "pauldron" on this website – it's been ten long years. Check out this offer and more in our roundup of the five best deals we found over the last 24 hours.
Blog · Buying Guides · 2 days ago
The 9 Best Things to Buy in June (And 4 Things to Buy Later)
While June may be a prime time for vacations, it's also a great time to find excellent deals. Check out our guide for what to buy in June and what you should hold off on until later in the year.

Save on a variety of Oakley prescription lenses, including the pictured Prizm Sapphire Polarized Lenses pictured in a Holbrooke Matte Black Frame (many colors available). Shop Now at Oakley

Find a deal on small appliances, including waffle makers, toasters, blenders, and more, including the pictured Hamilton Beach Quesadilla Maker for $19.99 ($10 off). Plus, you'll get $10 in Kohl's Cash for every $50 you spend. Shop Now at Kohl's

Apply coupon code "PZR35A" to get both of these for $80 less than purchasing them separately at list price. Buy Now at Proozy

That's a savings of $195 under the regular price. Buy Now at Amazon