Americans Will Rack Up a $255 Million Bar Tab This St. Patrick's Day

That's $10 million more than last year — and it's a lot of Guinness.
BY:
LOU CARLOZO
DealNews Contributing Writer 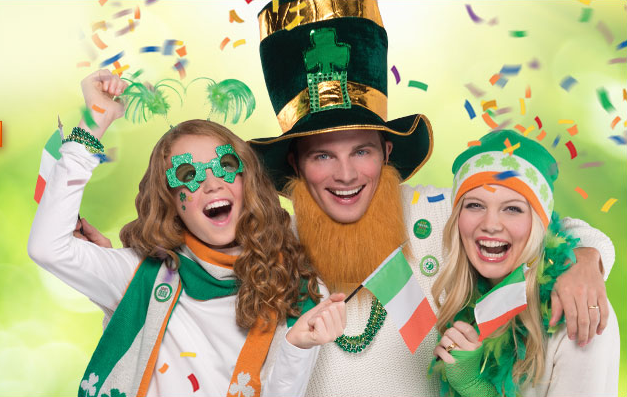 While it was St. Patrick who drove the snakes out of Ireland, even he with his mighty staff cannot cast off the hangovers set to occur on Tuesday, March 18. Alas, St. Paddy's Day falls on a Monday this year, and we can only imagine how many revelers will call in sick from work on these days.

While "sick day" tallies elude our grasp, other numbers surrounding this mid-March holiday can be counted, and quite a few of them green. The National Retail Federation forecasts that St. Paddy's spending for 2014 should grow modestly to $4.8 billion, up slightly (about 2%) from last year. Talk about a heapin' pot o' gold.

So whether Irish green runs in your blood, or simply down your Celtic sweater in the form of spilled St. Paddy's beer, here's our rundown on the stats, spending, and trivia surrounding St. Patrick's Day.

This NRF estimate is up about 50 cents from last year, and there's any number of ways people will spend that money — whether it's at grocery stores for corned beef or clothing stores for corny green sweaters. Of course, the Irish make some of the most beautiful wool sweaters in the world, but something about this holiday brings out the Fooligan in many a reveler.

You might think Patrick was the patron saint of those aged 18 to 24, as young adults in that range will honor the holiday in the largest numbers: 77%, according to the NRF forecast. Parsing those numbers further, the NRF predicts that 90% will wear something green, though it's hard to imagine what the other 10% will don instead.

Among those who will mark the holiday, 30.6% plan to hit up a bar or restaurant for a St. Paddy's party, the NRF reports. Slightly more than that (32.9%) will prepare a special holiday-themed dinner, and 21.2% will decorate the home or office. Rounding out the list of plans, 20.6% will attend a private party, and it's safe to say that at a majority of those gatherings, someone (followed by everyone else) will break out into a spontaneous version of "Danny Boy."

They say everybody's Irish on St. Patrick's Day, and judging by the statistics, it's perhaps not so much of a stretch. According to U.S. Census figures, 34.1 million U.S. residents claim Irish ancestry. That's more than seven times the population of Ireland itself (4.6 million). And if you guessed Boston as America's most Irish big city, then top o' the mornin' to ya: 24.1% of its residents — or more than 1.1 million — claim Irish ancestry, with Italians a distant second at 15%.

Boston is also home to the oldest St. Patrick's Day Parade, which took place some 50 years before the ink had dried on the U.S. Constitution. It has attracted more than 800,000 parade-goers in years past, but that's almost half of the turnout expected at the world's largest St. Patrick's Day parade.

You might think the largest parade would be in Dublin, Ireland (and indeed, their parade is part of a week-long St. Pat's celebration). But the honor goes to NYC, which got its start in 1762 thanks to Irish soldiers in the British army. That parade attracts about 2 million attendees, and the route itself runs almost six hours, winding past St. Patrick's Cathedral, which will receive an estimated 5.5 million visitors during the holiday.

When IbisWorld complied St. Paddy's beer consumption statistics in 2012, it forecast that brewers would rake in $245 million, or close to 1% of the annual take for a bar or liquor store. Since then, they've forecast annual growth for U.S. breweries at 2.1%, so it's an educated guess to say that 2014 beer sales should top $255 million. Reliable estimates on how much green beer will be quaffed are much harder to come by, but DIY tips and recipes for making the stuff are more plentiful than three-leaf clovers. Assuming that the typical St. Patrick's celebration is all about begorrah and less about bother, we hereby present one of the simplest recipes for green beer ever.

The First Ever Eleventh Annual World's Shortest St. Patrick's Day Parade in Hot Springs, AK. has turned into a long-running gag, even though its route is very, very short. The entire parade processional measures less than 33 yards, and runs along Bridge Street, one of the world's shortest streets. But it's long on fun, as the Grand Marshal this year is Jim Belushi, and Mountain Man from "Duck Dynasty" is the official parade starter. What's more, last year's fete attracted 30,000 people, which averages out to about 306 people per foot.

It's true: St. Patrick's Day brings out the Irish in just about everyone. But it also honors a Catholic saint who, even though he wasn't Irish himself, made huge cultural and religious contributions to the Emerald Isle. March 17 actually marks the date of Patrick's passing in 461 A.D. So raise a glass, break the soda bread, wear the green, and join the parade.

VIEW ALL
Blog · Morning Jolt · 14 hrs ago
5 Deals You Need to Know Today: Save 50% on Oakley Prescription Lenses
Sunglasses and prescription lenses collide at Oakley, with savings of 50% being the delightful result. Check out this offer and more in our roundup of the five best deals we found over the last 24 hours.
Blog · Buying Guides · 1 day ago
Ask an Expert: When Can I Expect a Price Drop on the TV I Want?
Do you have a question for us experts here at DealNews? If so, submit it and we might just answer it in a future column! Until then, check out our first column, which offers advice to a cost-conscious TV shopper.
Blog · Buying Guides · 1 day ago
59 LGBTQ-Owned Businesses You Can Support This Year
June is Pride Month, so if you're looking for a spate of LGBTQ-owned businesses to support with your wallet, we've got you covered! Check out our guide for 59 shops to check out now, as well as tips on how to find more.
Blog · Buying Guides · 3 days ago
The 9 Best Things to Buy in June (And 4 Things to Buy Later)
While June may be a prime time for vacations, it's also a great time to find excellent deals. Check out our guide for what to buy in June and what you should hold off on until later in the year.

Save on refrigerators, ovens, washers, dryers, and more from brands like Whirlpool, LG, Samsung, Maytag, and GE. Shop Now at AJ Madison

Get 50% off a variety of styles via coupon code "SALEONSALE". Shop Now at Reebok