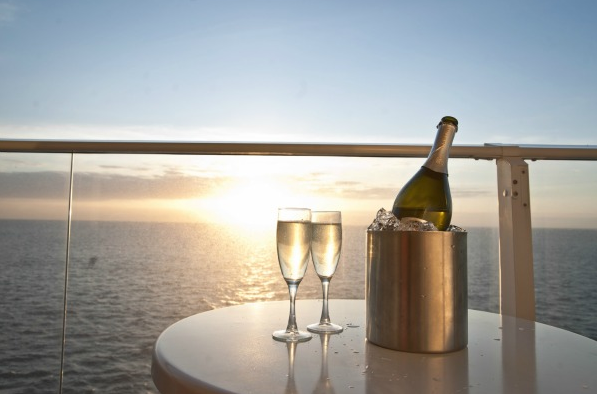 When was the last time you really relaxed, with no dinging of your smartphone as it receives work emails, no growing to-do list, and no chores eating up your free time? Perhaps it's time to give in and allow yourself to indulge in a vacation on the sea. When you're on a cruise, your biggest worry is where to position your deck chair. Cruises are also a great way to visit multiple destinations, without the hassle of unpacking multiple times or worrying about hotel check-in or check-out times. Your suitcases — not to mention your meals and entertainment — travel with you.

And as if that didn't sound appealing enough, almost everything is included with the price of your cruise, although there often are a few extras (such as land excursions and the tips for your waitstaff). For this reason, it's easy to stay within your travel budget. Whether your ideal vacation is viewing palm trees or fjords, European cities rich in history or sunny islands, there's a luxurious ship docking at your perfect port of call — at surprisingly affordable rates.

Set Your Sights on the Pacific Northwest

If you've never been on a cruise before, try a 1-night Holland America Pacific Coastal Cruise for two (from $138, a low by $20; expires July 31) as a way to get your feet wet without a huge time commitment. Not only is this the least-expensive cruise we've seen from Holland America, but it's also no doubt the most relaxing and picturesque way to travel from Seattle to Vancouver, British Columbia. Spend the morning taking in the Seattle skyline from the city's iconic space needle, or stop by the Pike Place Market and view the flying fish thrown by vendors at the world-famous fish market. The next day, you'll be in the beautiful coastal city of Vancouver, which features spectacular mountains as a backdrop, as well as a Canada's biggest Chinatown, a bustling restaurant scene, and myriad outdoor attractions. Holland America also is currently offering cruises to the Caribbean, Alaska, and beyond at up to 83% off.

Once you're on board with the idea of cruising — groanworthy pun intended — set sail aboard the Statendam on a 7-night Holland America Alaska Cruise for two (from $898, a low by $80; expires July 31). Depart from Anchorage on September 1 and sail to Ketchikan, the "Salmon Capital of the World" and home to the world's largest collection of standing totem poles. You'll also visit the state's capital, Juneau, nestled in the shadow of its namesake mountain, and Haines, Alaska's "adventure capital," which boasts a variety of outdoor activities, before reaching your final destination of Vancouver. When you're not taking in the stunning views of the Inside Passage or relaxing on deck, enjoy a complimentary culinary demonstration or sign up for a private cooking class at the ship's Wajang Theater and Culinary Arts Center. At night, sit back and relaxing during an intimate show, featuring Broadway performers backed by an onstage orchestra.

Leaving a day earlier (and switching carriers) can save you additional scratch, as the 7-night Royal Caribbean Alaska Cruise for two (from $798, a low by $800; expires July 31) is $100 cheaper than the above package. Of course, it also offers a slightly different itinerary, too. Depart from Seward, named for the U.S. Secretary of State responsible for the purchase of Alaska in 1867 and head on to ports of call: Juneau, Ketchikan, and Vancouver, as well as historic Skagway, which many hopeful people passed through during the Gold Rush of 1898. If you can pull yourself away from the magnificence of the Hubbard Glacier, Icy Strait Point, and the Inside Passage, explore the Radiance of the Seas, which underwent a $20 million renovation several years ago. The ship earns its name with eight restaurants, Wi-Fi, and a poolside movie screen. 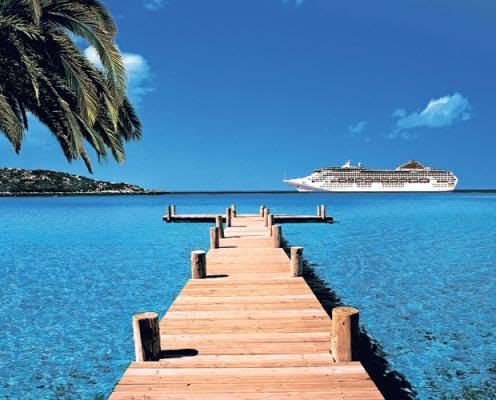 Sink your toes into the pink sand of Bermuda, which has clear water that's ideal for scuba and snorkel enthusiasts, as well as passengers on glass-bottom boat excursions. The 7-night Norwegian Cruise Line Bermuda Cruise for two (from $898, a low by $90; expires July 31) departs from Boston, MA, and docks for three days in King's Wharf, Bermuda. Golf enthusiasts can tee off on one of the island's renowned golf courses like The St. George's Club and Fairmont Southampton's Turtle Hill Golf Course. Aside from its pristine courses and beaches, this gorgeous island also boasts stunning underground sights: the pools, stalactites, and stalagmites of the Crystal and Fantasy Caves are not to be missed.

The Caribbean is the most popular cruise destination, accounting for nearly 40% of the cruise industry. Dotted with beautiful islands, each rich with its unique culture and history, it's no wonder. Embark on a 3-night Royal Caribbean Bahamas Cruise for two aboard the Majesty of the Seas (from $468, a low by $98; expires July 31), which departs from Miami. Explore Nassau and its beaches, duty-free shopping, and opportunities to swim with dolphins. You'll also visit CocoCay, Royal Caribbean's own secluded eco-friendly destination, where you can kayak, snorkel, relax on the beach, go for a guided nature walk, or visit Caylana's Aqua Park, a floating playground.

For a longer vacation, embark on the Norwegian Breakaway for a 7-night Norwegian Cruise Line Bahamas Cruise for two (from $1,198, a low by $60; expires July 31). If possible, leave a few days in your schedule to explore New York City before the ship sets sail for Port Canaveral, Florida, where you can choose shore excursions to Universal Studios or Kennedy Space Center — or take an airboat adventure through the Everglades to view alligators, eagles, and other wildlife. The ship also stops in Nassau and in Great Stirrup Cay, where you can parasail, snorkel, or simply relax on one of the white sand beaches. The brand-new ship made its maiden voyage in May 2013 and boasts the latest in cruise amenities, including an on-board aqua park, a spa with a fitness facility, and more than 50 available treatments and 16 eateries. 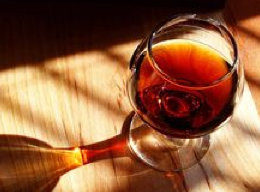 Hop across the pond and visit unique European locales with a 12-night Celebrity Cruises European Wine Cruise for two (from $1,798, a low by $200; expires July 19). As the name implies, the ports on this journey are known for their wines, and the cruise is timed so that you're visiting during fall harvest season. Depart from Harwich, England, then sip French wines in Le Havre and Paris, as well as La Rochelle, an important maritime port in the Middle Ages. You'll also visit Bilbao in Spain's Basque country and Vigo in Galicia. In Leixões, Portugal, you can sample the region's famous port wine and tour a 12th-century cathedral. The wine theme continues aboard the Celebrity Infinity, with the ship's sommelier conducting private wine tours. The ship also is outfitted with a 2-story glass wine tower and Cellar Masters, featuring an Enomatic wine-by-the-glass dispensing system.

A flight to Hawaii is about five hours from Los Angeles, so why not travel in luxury aboard the Millennium on an 11-night Celebrity Cruises Hawaii Cruise for two (from $1,898, a low by $40; expires July 31) instead? Be sure to explore the Mexican coastal city called the "Cinderella of the Pacific" and sample some of the local wine from the area vineyards. While at sea, stay active playing shuffleboard or shooting hoops on the ship's basketball court. Or relax at the spa, which offers massages, facials, and hair and nail treatments. Hawaiian ports of call include Lahaina on West Maui, as well as Kauai, Hilo, and Kailua Kona before docking in Honolulu.

We hope we've inspired you to get away from it all and take a cruise vacation, whether it be in the warm Caribbean, the cooler waters of the Pacific and Alaska, or along the western coast of Europe. However, if you're looking for a different kind of getaway, be sure to have a look at our weekly roundup of the top travel deals for additional discounted flights, hotels, and vacation packages.

The Deals at a Glance:

At the time of publication, these travel deals offered the lowest prices we could find. Deals may include blackout dates, additional taxes, and fees. All prices are be based on mandatory double occupancy.

That's the best price we could find by $20. Buy Now at Amazon

It's $300 off and the lowest price we could find. Buy Now at Sam's Club

Clip the $3 off coupon on the product page to yield a $3 low. Buy Now at Amazon