A look back ... 10 years of our Macworld Expo coverage

Macworld Expo 2008 is less than 24 hours away and like the die-hard fanboys that we are, we're excited to be back at the Moscone Center covering the show in search of the best Mac deals to be had. This year, however, we're particularly stoked as it marks our 10-year anniversary attending Macworld. So to celebrate the past decade, we've rounded up our favorite (and not so favorite) memories from the Expo floor. From accidentally rubbing elbows with The Woz and Jobs to emergency trips to the hospital, we're leaving no story untold. Plus, we've created a timeline of memorable Macworld product announcements over the last decade. So sit back, grab hold of that Mighty Mouse, and join us for a quick time warp back to 1998. 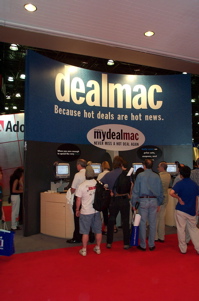 Shop a range of items, including furniture, decor, kitchen and dining, mattresses, and more. Plus, all orders bag free shipping. Shop Now at Overstock.com

Save on men's and women's apparel, shoes, and accessories. The 40% discount will show in-cart. Even better, you'll grab an extra 10% off via coupon code "BRFAMILY." Shop Now at Banana Republic