10 Gadgets That Will Be Trash Tomorrow 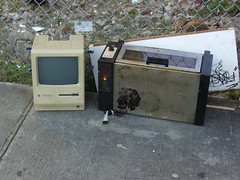 Bargain hunters should champion the early adopters, who buy new gadgets at top price as soon as they are available and lower the prices for the rest of us who wait a while. While we may pant over your iPad, we will lord it over you when we pick up one of your refurbs for a steal or get a next generation model that's monumentally better, and pay less than you did for your new one.

But there are some gifts on display this holiday season that will make losers out of all of us. They are hot now, but technology cycles are so fast now that these gadgets and gizmos are destined to be doorbusters today, and doorstoppers tomorrow.

We have traveled with the Ghost of Christmas future to find out which of this season's big sellers are in for a final hurrah. Most of these gifts won't even be good as cast-offs in the next two or three years as they become incompatible with emerging technologies.

That's the best price we could find for a similar table by $44. Buy Now at Amazon

That's the best price we could find by $34 when you apply code "RPACTIVE." Buy Now at Rockport

New Costco members get a $40 Costco Shop Card with a Costco Membership, as well as $40 off an order of $250 or more (before tax and shipping) on Costco.com. That's essentially a free membership with an extra $20 credit, if you use the gift cards. Buy Now at Groupon

Apply coupon code "MEMDAY15OFF" to get this deal. Aside from a November 2021 deal that lasted less than 10 minutes, this is the lowest price we've seen for this phone. (It's the best deal by $30 for a refurb today.) Buy Now at eBay